At 17, Arsh Ali is an archaeology prodigy, already participating in ASI digs and seminars. 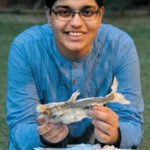 At 17, Arsh Ali is an archaeology prodigy, already participating in ASI digs and seminars.
Three months ago, Arsh Ali lost a coveted member of his aquarium: his little pet shark. But instead of disposing of its body, Arsh buried it in a tray filled with natron. A complex salt known for its ability to dry things up, natron is naturally available in Egypt, but Arsh had to create it by mixing multiple chemical elements.
He has learnt the method from the ancient Egyptians, about whom he knows much. “There is no foul smell or any organisms growing in it, even after so many days,” says Arsh, smiling proudly and pointing to the tray with the dead shark in the lawn of his house in Allahabad. His goal is to mummify his pet shark just like the ancient Egyptians did.

Pharaoh Bread
Arsh’s knowledge of Egyptian history, archaeology and mummification runs deep: he has researched coffins, funerary hieroglyphic inscriptions and even knows how to make bread like the ancient Egyptian did. “Every other day he cooks something for me,” laughs Fatima Ali, Arsh’s mother. At 17, Arsh is already an archaeologist, although he doesn’t have a formal degree yet. Unlike most kids his age, Arsh spends much of his time researching ancient history, visiting digs, attending seminars, and delivering lectures on history and archaeology.
Acknowledging his talent, the Archaeological Survey of India (ASI) has been inviting Arsh since 2015 to their programmes, seminars, excavations and explorations, a privilege often restricted to post-graduate students of archaeology. Arsh has so far taken part in seven excavations and explorations. His first tryst was with the excavations at Binjor in Rajasthan in 2015-16 under the ASI, followed by those in Rakhigarhi, the largest known Harappan site in Harayana, conducted under the supervision of Deccan College in Pune.
“The Harappans were excellent craftsmen. Even 5,000 years ago, they produced a lot of things,” says Arsh as he describes each dig in detail. The cupboard of his room is crammed with specimens he has brought back from sites for further study: wheat grains, terracotta bangles, pot shards, shells, neolithic tools, starfish, and an octopus.
Arsh knows 15 languages, including Hebrew, Arabic, Brahmi, Greek, Ugaritic, Nabatean and Phoenician, besides Kharosthi and Hieroglyphics. He credits his precocious knowledge to curiosity and reading. “I did nothing but read books, and purchased nothing but books every time I got an opportunity,” he says.

Antiquities at National Museums
Arsh’s archaeological interest has culminated in a quest: he wants to establish the evidence of the existence of Buddhism in Egypt by tracing the route of the Buddhist emissaries of the Mauryan emperor Ashoka in Ptolemaic Egypt in particular, and the Hellenistic world in general.
He delivered a lecture on the subject at the National Museum in Delhi last month, and visited Egypt a few months ago.
Arsh was allowed access to the antiquities at the national museums in Cairo and Alexandria, where he came across plenty of evidence to substantiate his theory: a coin with details of King Ashoka, literary references, terracotta items, objects of Indian art, and Brahmi inscriptions on pots. When asked about future plans, Arsh says, “I want to gift something to the world, something that might be useful.”
(Extracted from thehindu.com)