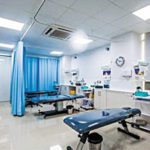 In an era when medical science is transforming health care throughout the world, alternative forms of treatment are also gaining ground. Wet cupping (Hijama) is one such form of forgotten therapy which is picking up pace both as a prophylactic and therapeutic modality across the globe.
Cupping has been practised from the ancient times dating back to 1500 BC. The practice of wet cupping has always taken a back burner place, as people thought that there was no science behind this. It was practised by unqualified people in the most un-hygienic of the settings.
With a structured training programme now available and with safe and good clinical practice, the awareness to use this form of therapy has shown good interest, as is seen particularly among the celebrities and sports personalities.
This therapy has now been scientifically proven and is widely used for a growing list of ailments which include chronic painful conditions such as various forms of arthritis, immunologic and allergic diseases like asthma, hay fever, eczema, endocrinological imbalances, psychosomatic illnesses such as stress, anxiety, depression, insomnia, and infertility.
This therapy has shown to influence the neural, hematological and immune system, thereby boosting an individual’s well being.
Different forms of cupping include static/dry cupping, moving/massage cupping, active release/flash cupping and wet cupping.
Static/ dry cupping is generally used for hypertonia, fibromyalgia, myo-fascial trigger points, joint restrictions, etc.
Moving/massage cupping is beneficial in cellulite reduction, sports massage, tissue mobilization, etc.
Active release or flash cupping: It is a combination of static cupping with movement, usually used for improved range of movement and release of tissue adhesions.
Wet cupping is beneficial for a range of health issues like arthritis, allergies, sleep disorders, stress, anxiety, depression, infertility and headaches.
Disposable cups of varying sizes are applied over specific points and suction is created. After a few minutes, suction is released and very superficial nips are made on the skin using a sterile scalpel and suction is reapplied to leech out the blood. Antisepsis is maintained throughout the session.
The therapy has many celebrity followers like Gwyneth Paltrow, Jennifer Aniston, Victoria Beckham, Justin Beber and most recently, swimmer Michael Phleps sported the purple round marks left by the cups at the Rio Olympics.

Wet cupping (Hijama) from an Islamic point of View
The act of performing the Hijama is a sunnah of Prophet Muhammad (pbuh) and it is extensively reported in a wide collection of authentic hadith. The practice of hijama forms an integral part of Islamic prophetic medicine.
Hijama is an ancient bloodletting technique that has been used in many countries to treat diseases or bodily disorders. The Chinese have played a leading role in treating various diseases using this technique and the Europeans have used it as well.
Hijama as the Best of Remedies
In Hijama, There is a Cure and Blessing
Anas ibn Malik (ra) reported that the Prophet (pbuh) said, “Indeed the best of remedies you have is hijama.” (Sahih Bukhari) 5371.
Abu Hurairah (ra) reported that the Prophet (pbuh) said, “if there was something excellent to be used as a remedy, then it is Hijama.”

ICAHT (Institute of Clinically Applied Hijama Therapy)
This facility is now being offered at ICAHT Bangalore, HSR layout which is a joint venture of Fantasy Group and is India’s first internationally recognized clinically applied Hijama/ Cupping Centre.
The centre is a world renowned, highly equipped, state of the art centre, directed by UK based doctors and specialists offering a range of therapeutics, conducting scientific research and providing training.
ICAHT is an Institute of Clinically Applied Hijama/Cupping Therapy which is recognized by the National Health Authority of United Kingdom.

Strict Guidelines are Followed
The patient after reporting to the clinic is examined by a qualified physician. A detailed history is taken and clinical evaluation is carried out. If the candidate is fit for wet cupping therapy he/she has to go through mandatory serological test as clinically indicated. A course of cupping therapy is advised and the patient is followed up every three to four weeks.
(Contact: 8884911666/777): Email:[email protected], [email protected]