“Khush Khat”- A Celebration of Islamic Calligraphy in Kashmir

Around 50 students from different schools of downtown Srinagar, artists from Cultural Academy and other artists, had put on display their calligraphic works in Arabic, Persian and Kashmiri language.
By TwoCircles.net, 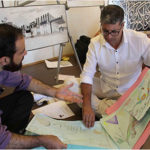 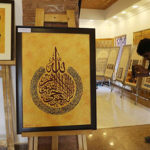 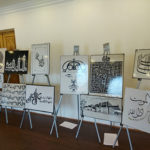 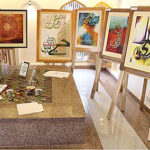 Srinagar: On July 17, the newly-constructed Tourism Information Centre near Jamia Masjid, Srinagar, was filled with locals who had come to see the Islamic Calligraphic works of noted artists and students of the Valley.
The Department of Tourism organised works of noted artists and students at the event known as “Khush Khat- a celebration of Islamic Calligraphy in Kashmir” “ where an on-site live demonstration of Islamic Calligraphic took place. It was inaugurated by the oldest surviving calligrapher from Srinagar, Mohammad Amin, in the presence of some government officials from Tourism department.
(Photos credits: Kartik Wahie and Abid Bhat/Kashmir Observer )
The event is being organised in collaboration with the Academy of Art, Culture and Languages and INTACH state chapter. Around 50 students from different schools of the downtown Srinagar, artists from Cultural Academy and other artists had put on display their calligraphic works in Arabic, Persian and Kashmiri language. Some of the students of the Institute of Music and Fine Arts, Srinagar had also put the calligraphic works through art and design beautifully on canvas painting. The event is part of the tourism department’s initiative to promote the old city as a heritage corridor.
“We have a rich heritage, culture, art and craft in this area of downtown (Srinagar). We want to preserve and promote it. This weeklong calligraphy event is one of its components which will help us revive and reclaim our ancestral calligraphic art,” said director Tourism, Mahmood A Shah. “This centre will provide all the information on the rich culture, heritage, art and craft of the old city to the tourists under one roof. We will have brochures here of all the art and craft and the historic places in downtown, which visitors can read and know about this place,” Shah added.
INTACH’s Jammu and Kashmir convener, Saleem Beg said people should know the rich heritage, culture and the art of this place. “Every third person in downtown Srinagar was good at Calligraphy. We have many places in downtown known by the name of the arts which was mostly the occupation of the local population,” said Beg. Some of the calligraphic works of the displayed art were purchased on the first day by the locals.
Ishfaq Ahmad, who displayed his calligraphy in Arabic, Persian and also in the Kashmiri language sold most of this calligraphic works to locals on the first day itself.