Pichhwai art is practised by both Hindus and Muslims in sync with their own socio-religious ethos. 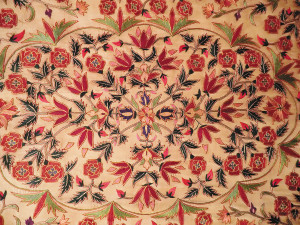 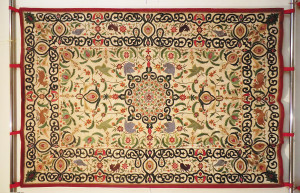 Pichhwai artists express themselves through paintings as well as embroidery. While among the Hindus, the Pichhwai artists paint large-sized murals with miniaturized mythological characters, mainly Krishna, the Muslims practised it in embroidery form. ‘Tree of life’ had been the dominant motif for the Muslim embroiders who were scattered all through princely India.
Today Pichhwai artists have got confined to the states of Gujarat and Rajasthan. The art is increasingly being lost and artisans are switching over to newer occupations. But a concerted effort is being made at Udaipur to keep this art alive, both in its paintings as well as embroidery forms. Jagdish Parihar, a traditional practitioner of Pichhwai art has been training and patronizing a team of painters as well as embroiders to continue their work under his stewardship.
Among Hndus, Pichhwai is a devotional art form. Hindu Pichhwai painters mainly paint large sized mural on thick textile material. These paintings portray stories related to Krishna in a panoramic format i.e., gathering several narratives in the same paintings in multiple frames. Colours are often sharp and characters are in miniature form. Since these murals form the backdrop of the presiding deity in Nathdwara temple, these have come to be known as “Pichhwai” or “hung back side”. Curiously, the manifestation of Krishna in this part is known as “Shreenath Ji”.
The Pichhwai embroidery is reported to have originated in the Mughal courts where they would employ ‘mochi artisans’ to stitch ‘Tree of life’ on large sheets, i.e., ranging from 6 feet by 4 feet to 6 feet by 14 feet. It travelled to Nathdwara in the 16th century. The work was very intricate with a multi-colour silk yarn used to provide good contrast on mainly beige background material. Of late, even artists from Pakistan are said to be arriving to learn this art.
In recent years, the Pichhwais of Nathdwara have caught the eye of famous architect from Baroda, Karan Grover, who has taken upon himself the task of getting the art recognized by the Unesco. Says Grover, the man behind conservation of the fabled city of Champaner-Pavagadh in Gujarat, (and who sponsored the exhibition in Bengaluru), the Pichhwai art survives through a slender link with the past and the artisans need support both from the connoisseurs of art as well as the Government. “It has historically been associated with Nathdwara temple alone and only a few families have been practising it through centuries. If indeed a generation is removed from the middle, it will be rendered extinct. The exhibition at Bengaluru, when scions of nearly 200 former Raj Gharanas (princely families had gathered here in connection with a royal wedding around January 25-26 this year), is merely to draw the attention towards the dying art,” says Grover.
Having been handed down through nearly 20 generations, the Pichhwai art has survived over the centuries. Most of the artists have taken meticulous care to preserve sketches of previous work by documenting details of their buyers who are part of an international clientele.