A Guide to Journalists to Cover Muslim Communities

Islamic Voice 0 August, 2017 12:00 am
The Men and Woman Who Ruled Pakistan
Kannada Book on “Conspiracies of Sangh Parivar” Released
Spiritual Insights on Non-Violence

The book argues that a basic knowledge of Islam is now a necessity not just for foreign correspondents, but for anyone who wants a better understanding of news involving Islam. 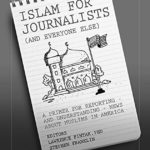 Washington: A book, “Islam for Journalists (and Everyone Else)” serving as a guide on how to report on Muslims, has been published in an attempt to help local journalists produce more nuanced coverage on Muslim communities.
The book is written by Lawrence Pintak, a veteran journalist and scholar who was founding dean of The Edward R. Murrow College of Communication at Washington State University and former  International Center for Journalists (ICFJ) Knight Fellow Stephen Franklin.
The book includes contributions from 14 academics and journalists, covering Islam’s basic tenets, its historic and cultural influence and its complicated relationship with politics. The book also features “Reporter’s Notebook” sections, in which journalists discuss their personal experiences reporting on Islam.
The book argues that a basic knowledge of Islam is now a necessity not just for foreign correspondents, but for anyone who wants a better understanding of news involving Islam. Many U.S. journalists remain generally uninformed about the world’s second-largest religion, and this lack of exposure negatively colors their reporting on the topic, the book adds. The book recommends reporters to develop a relationship with the Muslim community.
“One of the major difficulties that U.S. and European journalists face when reporting on Islam domestically is that some communities tend to mistrust the media due to what they perceive as general negative treatment of Muslims by the press,” reads the book.
“To get past this, Andrea Elliott (who won a Pulitzer for her reporting on Brooklyn’s Islamic community) emphasises the simple value of “showing up.” Reporters should continue to show genuine interest through daily interactions with the community they are covering, even if they are initially rejected, she argues.”
“Elliott goes on to recommend finding a conduit “ a trusted community figure who can help get you inside homes and mosques. However, she warns against going only to the imam of a Muslim community for perspective, a common habit among reporters. She sees it as analogous to going straight to City Hall “ while you might get the official line, you’ll probably miss a more authentic perspective from other community residents,” the book adds.
The book also seeks to cultivate sources and contacts by visiting a mosque for how local journalists can begin to develop contacts with their city’s Muslim community.
“Denson, a veteran reporter for The Oregonian, advises reporters to build these relationships in advance, before you ever need to need to call on them. These sources can give you the “person on the street” view of events, which in Denson’s view is more authentic than the filtered perspective of Western pundits,” the book says.
“When attempting to build up their list of contacts, reporters will probably face language barriers or, more seriously, the possibility that no one will want to talk to you.”
The book further reads, “Assuming most reporters aren’t fluent in whatever language predominates in the area they’re covering, one suggestion is to enlist the aid of an academic expert or another insider who can translate or help give context to what you are hearing.”
(With inputs from IJNET)