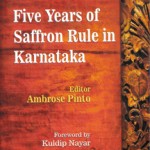 r Justice Michael F. Saldanha says the five-year rule was a golden age of criminality as elite offences went up by 400%. The government increased the outlay on advertisement to the media by 23% within a short duration of coming to power.
r The government kept up the refrain of industrial growth but the reality is that there was 8% migration of industry out of Karnataka due to power shortage or corruption.
r Chief Minister Yeddyurappa donated Rs. 3,400 to Mutts and Temples. His successor Sadananda Gowda added another Rs. 107 crore during his short tenure while the third CM Shettar donated Rs. 100 crore.
r Custodial deaths increased by 38%.
r Fake encounters rose by 42%.
r In 40% of the dowry death cases, the police forcibly closed the case as accidental or suicide.
r Violation of building norms in cities rose phenomenally. In case of commercial buildings, the illegally built space is on an average 250%. This has led to choking of the state.
r According to research conducted by PRAGATI money lost everyday in Karnataka due to corruption in Government is Rs. 40 crores. Impact of Rs. 40 crores lost per day leads to a loss of more than Rs. 80,000 crores in annual GDP for the State.
r During the five-year BJP rule, 65,289 illegal structures in Bangalore city were able to get a stay on and thereby protected from demolition.
r A Sichrem report demonstrates that while conviction rate fell all across the spectrum of crimes against women”rapes, molestations, dowry deaths, domestic cruelty, sexual harassment et al”the case of moral policing by vigilante group went up.
Source: Five Years of Saffron Rule in Karnataka