New Approaches to an Inclusive India 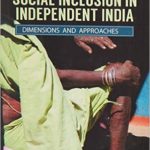 India has four per cent of the Earth’s land but hosts nearly 16 per cent of its population, which is characterised by considerable religious, linguistic and ethnic diversity. One must salute the makers and writers of the Indian Constitution who laid a framework for legislation for the country in a remarkably short time, and the visionary leaders who stewarded the nation on the trajectory of progress.
The considerable diversity of India’s population, coupled with considerable economic inequality and poverty, have built contrary pressures on the polity and triggered a perpetual debate on inclusion and exclusion of communities into/from the race of development. Ensuring equity, providing dignity and building a prosperous India has been a formidable task for the country’s leaders. A democracy demands that no section of the people should suffer from exclusion. Yet, it is a known fact that no society is exempt from or immune to social exclusion. Consequently, ‘social inclusion’ and ‘social exclusion’ are a much talked-about issue today.
India’s 11th Five-year Plan took up the concept of ‘inclusive growth’ as although there was tremendous growth of the economy, the benefits of this had remained confined largely to certain social groups and a limited number of individuals. In this book, the author, a well-known social scientist (he was member of the Sachar Committee, too) has discussed what he regards as various historical, psychological and economic reasons for the fact that certain social groups in the country have not benefited in the same way as others have.
The author identifies four bases for recognition of cultural and social identity in India. Of these, two, i.e., religion and caste, were territorially dispersed, while language and tribe were amenable to territorial anchoring. Initially, language was taken up for creation of states, but it seems it has been given up for other identities. Tribals did live in exclusive habitats but never enough to constitute a state. Gender is yet another category which has suffered social and economic exclusion, due, in part, to the conjunction of patriarchy and religion. It is now argued that the traditional role of men and women should no longer be the basis for male superiority and female subordination. The author finds a reason for women being assigned a ‘superior status’ i.e., their biological role in reproduction. “It is necessary to underline here that the physiological differences cannot be wished away, and ignoring the same will not emancipate and empower women and facilitate the process of their social inclusion”, he advocates. The author recommends a ‘need based approach’ on the issue of poverty, including provision of adequate nutritious food, appropriate housing, affordable healthcare, quality education and suitable employment based on skill/qualification, and adequate opportunities for upward mobility.
Offering an extremely readable text, the author exhibits masterly expertise in discussing sociological dimensions of the polity and suggests a slew of innovative approaches to see the materialisation of inclusive growth.