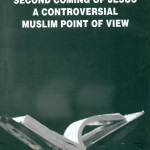 This tiny book by Kerala based author is an attempt to debunk the fallacy of belief about Jesus’ (Prophet Isa, peace be upon him) second coming. Generally Muslims believe that Jesus was lifted to the havens by Allah, is still alive and would be sent down to earth by God to complete his given tenure of life and that he would be professing Islam and would follow the remaining part of his life like Muslims do. The author describes all these presumptuous and without any basis as far as the Quran is concerned.
However, Hadith does talk about Jesus’ second coming. But the accounts clearly run counter to the Quranic precepts and do not satisfy the rational standards of Islamic view of worldly life. Bijli builds his narrative on the Quranic verse that says that “They neither slew him, nor crucified him, but it appeared so unto them; and lo! Those who disagreed concerning it are in doubt there of; they have no knowledge thereof save pursuit of conjecture; they slew him not for certain”. (4:158).  A second verse emphasizing death of Jesus appears in surah Al-Imraan (verse 55) which says: “Lo! God said: O Jesus! Verily I shall cause thee to die, and shall exalt thee unto me, and cleanse thee of those who are bent on denying the truth; and I shall place those who follow thee above those who are bent on denying the truth, unto the day of resurrection. In the end unto Me you all must return, and I shall judge between you with regard to all on which you were wont to differ”.
He also clears the mist around the Quranic word rafi’uka (will raise you) which has been generally taken as referring to Jesus’ ascension to Allah. The verb rafaa’  has been used to denote elevating one’s stature, raising one in popular estimation and granting exalted status, rather physical lifting of Jesus up to heavens.  The Quran uses the same verb with reference to Prophet Idris (peace be upon him), but no one has attributed this to his physical ascension.
Theorists of Jesus second coming also seek support from yet another verse (sura Zukhraf, verse 61) which says: “And lo! Verily there is knowledge of the Hour. So doubt ye not concerning it, but follow Me. This is the right path”. The author opines that Muslim interpreters of the Quran have generally been guided by the mistaken notions generated by the Hadith.  If indeed the second coming will be the sign of the Hour (the day of Judgment), why should Quran emphatically say that it will be sudden.
So it looks odd that Jesus will come before this, will marry, raise a family, will embrace Islam and then die. If indeed he (Jesus) would come for this long a period and inhabit the earth, how one explains the suddenness (in Quranic words the Qiyamat would happen within the span of blinking of the eye) of its occurrence. Furthermore, there is no need for Jesus to profess Shahadah once again as he himself was a duly accredited Prophet of God and he preached the same Islam (i.e., submission of God) to the People. So where is the necessity of him professing the deen of Prophet Muhammad?
Though the author has negotiated the subject with success, the book is poorly edited. Editing tools have been thoughtlessly used and leave the reader confused. Arabic terms have often been italicized as well as rendered in bold fonts and have been occasionally been underlined too. There is no standard format for references which have been provided in brackets at some places while in others they are all caps.