Trevor Aaronson raises questions about illegal and questionable practices by the American investigative agency that has been into the game of entrapping radical youth. 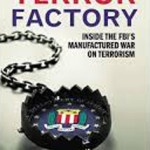 Reviewed by Maqbool Ahmed Siraj
The book under review The Terror Factory: Inside the FBI’s Manufactured War on Terrorism is a bold attempt to unravel and expose the United States’ war on terrorism which has devastated two States namely Iraq and Afghanistan, and caused mayhem over wide swathes of land in the Middle East.
The Federal Bureau of Investigation (FBI) has been deft at announcing foiled terror plots frequently. The highly monopolised US media”which also caters to various national media around the world”makes condescending noises and hypes “the good work in defusing the threat to security”. What however remains from being publicized is that most terrorists within the US are able to carry forward potentially lethal plots only because FBI informants and agents supplied them the means, in most cases weapons and equipment, in some cases even paying for rent and cash for logistics. The book revolves round the query: Is the FBI catching terrorists or creating them?

Throwing Bait for the Trap
The pattern has almost been patented in the years following the 9/11 attack on the World Trade Centre in New York. The FBI’s paid informants”who now number around 15,000″are on the lookout for young Muslims who espouse radical beliefs, are aged 18 to 35, are vocal about their disapproval of US foreign policy, or have expressed sympathy for international terrorist groups. These youths are then moved to the next stage; the sting in which an FBI informant, posing as a terrorist, offers to help facilitate a terrorist attack for the target. Inert bombs and disabled rifles are supplied to the would-be terrorist. FBI agents swoop down on the prey when they are about to dial the detonators. In the years since 9/11, the FBI and the Justice Department have indicted and convicted more than 150 people following sting operations. In most cases, an FBI informant not only led one of every three terrorist plots, but also provided all the necessary weapons, money and transportation, concludes the author’s research over the last few years.

Prejudices Amplified
Fed on a diet of prejudices against Islam, FBI has been operating on the basis of belief that no international terrorist organization is now capable of attacking the US and therefore the best the organization could do was to induce and inspire someone already in the West to carry out a terrorist attack”an attack Al-Qaeda’s leadership would likely know nothing about until it happened”and then stupidly claim credit for it. And inspire they must in order to convince the US Congress that rolls out the $3 billion package to the FBI annually. To assist with this, the FBI came up with a kind of radicalization spectrum, running from sympathizer to operation. As one of the officials told the author: “We are looking for the sympathizer who wants to become an operator, and we want to catch them when they step over that line to operator”.
And FBI’s anti-Muslim prejudices can be imagined from its counter-terrorism document in circulation in 2011 which described Prophet Muhammad as ‘a cultist leader’ and labeled Islamic charities as a “funding mechanism for combat”.

Funding anti-Israeli Campaigns
Informants infiltrate mosques, enamour some young people with their anti-Israel speeches and recruit radicals into arms training and possibly, even supply them a few. The most amenable (or vulnerable) to the FBI are those who have some violations of immigration laws registered against them. They are intimidated and bullied in order to fall in line or be ready to be deported. Not many people are strong enough to stand up and resist and fight”to reject their offers. In other words, the potential recruits are told to work as informant and the FBI will help stop them from being deported; refuse and the FBI won’t use its considerable influence in courts t to prevent the issuing of a one-way ticket out of the country. Among other bludgeoning measures are putting the nay-sayers on ‘No-Fly’ list. In some cases garbage from homes and digital cast-offs too are scanned for potential clues to someone’s criminal antecedents. Dale Watson, FBI’s Assistant Director for Counterterrorism told Aaronson: The Bureau wants informants who have committed unprosecuted crimes, so that those crimes can then be used as leverage to control them.
Sixty-three per cent of American Muslims are immigrants, having been born abroad. Since most of them fall in high income bracket and are fairly represented in professional class, few are prone to such baits from the FBI. But the spy net the FBI is spreading has caused alienation among them as newcomers in any mosques are suspected. People are reluctant to speak to new neighbours. It restricts voluntary information and most of the info reaching the FBI is of coerced nature.

FBI Fuels Bigotry
Once into their dragnet, the FBI informants fuel bigotry in their prey and bolster their personal narratives of persecution as a misunderstood Muslims. They will pounce upon any opportunity to amplify paranoia and hatred of Jews. For example one informant told his recruit: ‘I was reading in one of the newspapers, in the New York Times, that every second among the advisors in the White House were Yahuds’.
FBI agents are under severe pressure from their superiors to build a terrorism case, something to offer to the public about terrorists taped, caught on secret cameras in order to justify the expenditure from the public exchequer. Equally significant is observation from Myron Fuller, ex FBI veteran: “The billions of dollars allocated to terrorism have forced the FBI to assume that a danger exists in communities where intelligence indicate no threat is present, and sting cases are simply the Bureau’s way of justifying how it is spending all the money it receives for counter-terrorism.”

Bogeymen from Buffoons
The author is of the view that most of those convicted for terrorism in 150 and odd cases so far were ordinary crooks and braggarts who walked into the traps laid by the FBI informants and were convicted on the basis of acts they did simply out of stupidity. No wonder then that several FBI former officers complain that the Government was creating bogeymen from buffoons in the name of fighting terror.