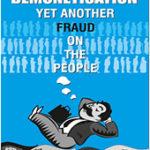 Demonetisation came as a bolt from the blue for most Indians, leaving the common man shell-shocked. But those whom it intended to hit were not a bit worried. Their stocks of the dirty millions were replaced with new notes. The common men and the women who braved the long queues were often turned away from bank counters and the ATMs which took the Prime Minister’s appeal to go cashless seriously.
Demonetisation: Yet Another Fraud on the People is a booklet dissecting something that has shaken the nation from its roots. It attempts to unveil its impact on small retailers, informal sector, farmers and the common man. The 30-page booklet marshals immense evidence to show that the Modi Government is increasingly surrendering the national interest and playing to the tune of superpowers and big corporations.
The Prime Minister’s nationally televised speech on November 8, 2016 invalidated 86% of the currency in circulation by banning the Rs. 500 and Rs. 1,000 notes. The move was as much surprising as it was disconcerting for the common folk. It was clear that only a small clique took the decision and foisted it on the 1,200 million people. It was pretty obvious that the Government had made no advanced preparations for a decision with cascading consequences. The ink and paper for the new currency had not been imported and modest estimates said even at full speed, the security presses required nine months to replace the old currency notes with new ones. Still worse, the Government was bringing in Rs. 2,000 notes in place of Rs. 1,000 notes, making the hoarding of the black income easier.
Four major reasons were cited for the move, i.e., reducing black money and eliminating fake notes, terror-funding and drug trafficking. The author minutely dissects various issues related to the move. According to the RBI sources themselves, fake currency amounted to only Rs. 400 crore in the total Rs. 17.9 lakh crore currency notes in circulation i.e., mere 0.0022%.

Doubtful Success
Will it really unearth or curb the black money? The CBI had indicated in 2012 that nearly $500 billion Indian money was stashed abroad. This amounts to Rs. 24.50 lakh crore. Even here the Modi Government’s rationale was questionable. Black money, black income and black wealth, though used interchangeably, are not the same. Wealth is a portfolio which may be in the form of stock, real estate, gold or cash. The income generated in transactions where tax is evaded is black income. Even according to former Reserve Bank of India Chief Dr. D. Subbarao, black wealth is not more than Rs. 300 lakh crore. The maximum amount of black money that can be immobilized by demonetisation”Rs 3 lakh crore”is just 3% of the total black income being generated in the economy this year (Rs 93 lakh crore), and 1% of the black wealth (assuming black wealth to be a low Rs 300 lakh crore). In all probability the Government will not be able to demobilize even Rs. 3 lakh crore; at best it could have demobilized just Rs. 1 lakh crore.

Exercise in Futility
Figures prove it too. By December 20, the RBI reported that around Rs. 13 lakh crore had already been collected out of the total Rs. 15.44 lakh crore invalidated notes. Perhaps by the end of the deadline, entire high value notes might have flowed back into its kitty. This points to the futility of the entire exercise, which only put 98% of the populace, who had nothing to do with black money, to extreme difficulty.

Mere Drama
The Government was clearly enacting the drama of being harsh on black money. It had no real intention of targeting real black income generators and hoarders of black wealth. The author questions why the Government spared the ones listed in what has come to be named “Swiss Leaks” and “Panama Papers”. The Indian Express had published the list of 1,195 Indians who held accounts and their balances for the year 2006-07 in HSBC’s Geneva branch. It read like a Who’s Who of Indian business tycoons.
But that is just one aspect of corporations being supported by the anti-poor Government. The author provides instances of how subsidies are offered to major companies, and how exemption from taxes, and loan write-offs under the garb of ‘restructuring loans’ are the norm.

MNC Agenda
In the author’s view, the main motive behind the demonetization was to bring in MNCs dealing in digital economy. It was being done at the behest of Washington, more precisely the USAID which was interested in the entry of American MNCs in the sector. Firstly, it was to suffocate small farmers and facilitate major corporations to enter the field. Second, eliminate the retailers and make way for MNC retailers like Walmart, Carrefour, Metro, etc into the trade. Thirdly, in October 2016, the USAID and the Indian Finance Ministry had entered into an agreement known as Catalyst: Inclusive Cashless Payment Partnership with the goal of affecting a quantum leap in cashless payments in India. The partnership was based on a report commissioned by USAID in 2015, and presented in January 2016, titled Beyond Cash.
The booklet is timely and is available in several languages.