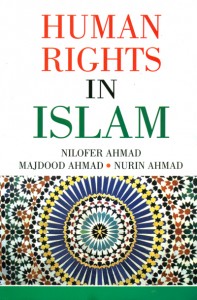 Know Your Rights
The most amazing aspect about the book, Human Rights in Islam is the fact that it has been authored by a trio”¦ husband wife and their daughter! The trio hails from a highly educated Siddiqui clan of Nagpur. Dr (Mrs) Nilofer Ahmad holds a PhD degree, and is a writer. Majdood Ahmad, also has a PhD and is a life member of various national and international societies. He was with the government of India, ministry of agriculture for 38 years in positions like regional director and then retired as deputy commissioner (poultry), government of India, New Delhi in 2007. After retirement, he settled down in Nagpur with his family. The duo has written another book titled, “The Golden Book of Muslim: Religion of Equality, Duties and Peace”, published in 2009. Nurin Ahmad holds a MBA (HR) degree, and is currently the human resources officer, Chhattisgarh Medical Services Corporation Ltd, Raipur in the government of Chhattisgarh.
The book, “Human Rights in Islam” addresses human rights in the light of the perfectly balanced system of laws of Islam. Some nations and international organizations call loudly to principles that seek to guarantee human rights. The authors have attempted to bring out the facts that Islam established, within its enlightened Shariat (law and jurisprudence) many of these human rights 14 centuries ago. The rights enumerated by modern international organizations are characterized by deficiencies in conceptualization, flaws in formulation and in application. ” They are subject to political agendas, economic pressure and culturally biased viewpoints. Such rights are often enumerated and established not for the interests of all humans, but for the benefit of certain organizations and powerful special interest groups,” say the authors.
The book starts with the chapter on human rights conferred by Allah, Islamic system and human rights, Prophet Muhammad (Pbuh) and Caliphate of Islam, Shariah and Legacy of Prophet Muhammad, social life under Islam, the judicial system in Islam, human rights guaranteed in Islam, women’s rights in Islam and rights of inheritance in Islam. A very refreshing chapter on rights of animals is worth reading many times.
The authors have taken extra efforts to compile the book based on research, going into the history of the caliphs and their style of life and rule. The initial pages of the book have a chapter titled “Editorspeak.” It is interesting, but a bit surprising as there is no signature of the “editor” and the reader is left gaping with wonder as to who is the editor. Also some care could have been taken in editing by deleting words like “damn” that have crept in.
The book is indeed useful for students learning about human rights in Islam and for general readers. The price of Rs 795 is a bit steep, and probably the print quality, especially the font and typeface could have been much better.
Overall, a good effort by the trio authors, at least in bringing out the essence of human rights in Islam based on the Quran and the Sunnah