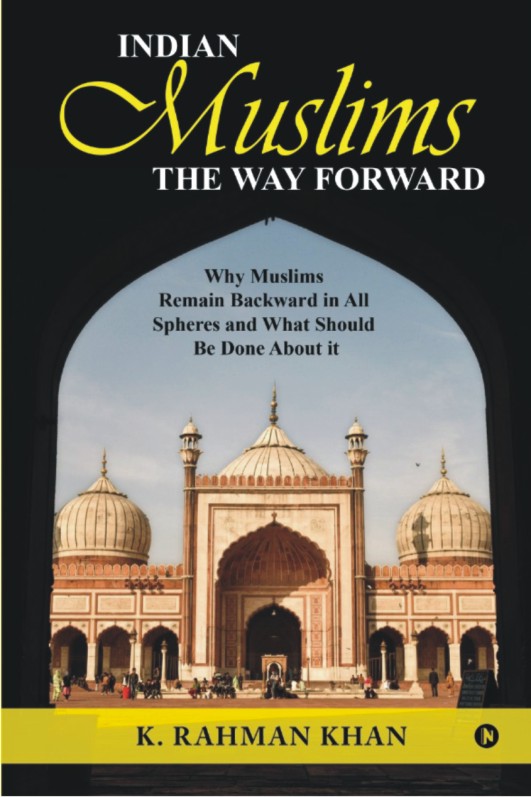 For decades, the Indian Muslims have been in a state of disconcert and disquiet. Anxiety about their safety, economic and educational downfall, and curiosity about how they have landed here and how they would come out of this gloom? That had been a theme for a long for many Indian Muslim intellectuals. They made an incisive analysis of the precarious conditions of the Muslims and have articulated mixed opinions through their publications and perorations. Rahman Khan has recently added an enlightening nugget in this literary genre through his latest creation, ‘Indian Muslims – The Way Forward.’ He has delved deep into different dimensions of their dilemmas and has postulated some rousing resolutions for their resurgence. The unique about this book of 5 chapters and an epilogue is that it encapsulates Muslims worldwide.

His prime proposal for the flourishing of Indian Muslims is the peaceful coexistence with the people of other faiths. He has eloquently explained the concept of fundamental unity in every religion. Despite some differences, permissiveness has to be eschewed, irrespective of the numerical strength in a plural society. That is reminiscent of the great visionary of the nineteenth century, Sir Syed Ahmed Khan. Who had virtually espoused amity among Hindus and Muslims and had once practically demonstrated his zeal by inviting Raja Dev Narayan and Maulana Mohammed Fasih for the foundation stone laying ceremony of a madrassa in Ghazipur. The author of this book, too, has tried to convey the same prophetic message for their peaceful progress and prosperity. He has vividly dissected the pathetic political and religious leadership quality that has despondently disillusioned the Indian Muslims. At one point, he has stridently lashed at the conservativeness of the religious leaders. Who have compartmentalized the community on the sectarian fault lines resulting in their spiritual downfall?

On the other hand, he is a politician who had been honest enough to assert that a few politicians actually played a negative role in Muslim society’s constructive shaping, illustrating the Shah Bano Case and Babri Musjid event. He has also underscored the need to evade the minority syndrome and separate politics from religion. But his criticism of the abysmal leadership quality is collective and not that of the individual prescience and myopia. Prof. Aziz Ahmed had penned a revealing book in 1970 titled ‘The Islamic modernism in India and Pakistan (1857 – 1964).’ In which he had made a comprehensive study of the intellectual journey of the luminaries of the said period starting from Sir Syed Ahmed Khan to Maulana Abul Kalam Azad, Maulana Maududi, and Maulana Abul Hasan Nadvi and had briefly discussed the impact of their thoughts and views on the mental evolution of the Muslim masses.

Rahman Khan has also vividly pondered over the reasons for the educational and economic downfall of the Indian Muslims. He espoused that the Muslims should make use of the various educational opportunities provided by the government through various schemes. He particularly advised the religious leaders to reform the madrasas and in religious sermons, galvanize their energies not only to promote the religious aspects but also to discuss the ways to uplift the educational and social standards of the Muslims. He has suggested various avenues to augment the economic conditions of the Muslims by the meticulous management of the wakf properties, zakat donations, and to involve in industrial enterprises and corporate sectors. Apart from it, he has counseled them to make their identities and problems felt in the country through their media that is badly needed. In chapter 3, on page 88, he has navigated their attention towards a cardinal aspect: they should find out where they have gone wrong? This was the critical topic on which an eminent scholar Dr. Rafikh Zakria shed enough light in his book titled, ‘The Indian Muslims – Where They Have Gone Wrong.’ He, too, had averred that the absence of Muslim leadership in post-Independent India had been the leading cause and had cautioned them against forgetting their Indian roots.

The daunting problem of communalism has been dealt with in graphic detail. Here, the author accentuates that communalism is often the manifestation of superiority complex and exclusivist attitude that harms the Muslims and isolates them. By citing the examples of sufferings in various Islamic countries due to this delusion, he has asserted that such biases are antithetical even to the Islamic teachings. By quoting that ‘only person one can change is oneself,’ he has adeptly advised Muslims a paradigm shift in some of their demeanors, do the introspection and become the bridge builders to live with tranquility. Asghar Ali Engineer had made a careful study of riots in various cities a few decades ago and had penned a book titled ‘Communal Riots in Post-Independent India.’ He had concluded that most of the riots had occurred on trivial matters, which could have been easily avoided through proper communication and persuasion between the local leaders of Hindus and Muslims. This is the inference again the author of the book under review desires to convey to the Muslims to develop amicable relations with the people of different faiths and involve in fruitful interfaith dialogues to avoid any misunderstandings. He has given a subtle message to the Muslims through an adage, ‘If it is dark, light a lamp.’ In the concluding chapter, he has illuminated with an ardour, the spiritual aspects of the Muslims. He has enlightened that the lack of proper Islamic knowledge would often adversely affect the peaceful living. In this regard, he has instilled a fear of God in the souls of the community leaders to work altruistically for the welfare of the Muslims and the whole of humanity.

The Quranic verses at the start of every chapter and interspersed at the requisite places in the whole text have sanctified Rahman Khan’s thoughts. More than the reflections on the past pathos, it is a guide for posterity. The book with an eclectic read has lots of relevant quotations and extracts of books and lectures of versatile people. His gift in contextuality and lucid writing has made it a fascinating read.