The book was released by noted Kannada author Mr. Marulsiddappa in Kannada Bhavan situated in the heart of the city. 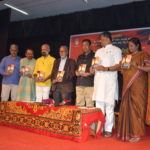 Bengaluru: A Kannada book titled “Sanchugara Sangha Parivara” by noted author Vidudalai Rajendran was released in the Kannada Bhavan on Saturday (Jan. 20) morning amid huge applause by a large audience. The title can be translated as “Conspiracies by Sangh Parivar’. It was originally written in Tamil by Rajendran but has been translated into Kannada by Ms. Kalai Selvi, who writes both in Kannada and Tamil. The 300-page book is priced at Rs. 300 and has been published by Sirivara Prakashana in Bengaluru.
The book was released by noted Kannada author Mr. Marulsiddappa in Kannada Bhavan situated in the heart of the city. Those who received the first copies included noted Kannada journalist Agni Sridhar, editor of the mass- circulated Kannada weekly “Agni” and Mr. B. K. Hariprasad, Rajya Sabha MP and Congress politician.
Speaking on the occasion, Mr. Hariprasad said the RSS is a rumour spreading society which is opposed to the Constitution and does not believe in equality of all in the society. He said they were able to gain roots in the Hindi heartland mainly because the north Indian states were not able to produce social reformers such as Mahatma Jyotiba Phule, Periyar Ramaswamy Naicker, Sri Narayana Guru, Basavanna (all from southern states) who wrote against the inequality. Hariprasad said RSS is opposed to reservation policy which has created a level playing field for the SCs, STs and the OBCs. “They are not ‘Deshabhaktas’ but were Duveshbhaktas (lovers of inequality and differences in the society)”, he remarked.
Hariprasad said the media controlled by a few individuals was partisan in its approach. Rape of Nirbhaya was projected in order to create mass uproar against the Congress Government while the rape and murder of Dalit girl in Haryana (ruled by the BJP) is being suppressed.
Journalist Agni Sridhar, who had gone through the text even before publication of the book, said the book redefines the Sangh Parivar and inspires a common Indian to reinvent tools to combat the fascists who are out to divide the society. Citing the attack on Dalits at Koregaon-Bhima, the RSS was working to suppress the Dalit and followers of Dr. Babasaheb Ambedkar. The parivar outfits are maligning Tipu Sultan who fought four wars against the British colonial rule. He said the people are free to have their dietary choices. He called for fighting against the culture which suppressed the scheduled castes, tribes, OBCs and the religious minorities. He urged immediate translation of the book into Urdu.
Mr. Vidudalai Rajendran, the Tamil author of the book, questioned the patriotic antecedent of the Sangh Parivar and said Muslims and Christians were indigenous people who converted to religions that offered the suppressed people liberty and equality in a religion and allowed them access to sanctum sanctorum of mosques and churches.
Noted Kannada author Dr. Marulsiddappa lamented that secularism was getting orphaned in India. He said our capacity to fight the fascist forces was on decline which should be a matter of concern. He complimented Vidudalai Rajendran and Kalai Selvi for bringing out the well-researched book and said there was no greater Hindu and saint in India than Mahatma Gandhi, who was assassinated by a fanatic belonging to Sangh Parivar.
Kannada translator Kalai Selvi questioned as to who opposed the implementation of Mandal Commission Report for 27% reservation for the Other Backward Classes (OBCs) when they (the OBCs) were Hindus. Why should someone question as to what an individual is eating and whom he or she is marrying? She said she decided to release the book in Kannada Bhavan and dedicate it to the memory of Gauri Lankesh the day she was killed.
(Report by A Staff Writer)