Islamic Voice 0 November, 2017 12:00 am
A Treasure-Trove of Spiritual Wisdom
Clearing the Mist on Intercession
A Remarkable Testimony to Badshah Khan’s Deep Spirituality 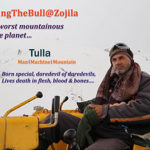 Srinagar: “Tulla Dozing The Bull”, a documentary shot by Kashmiri filmmaker Jalal Ud Din Baba at Zojila has won the 3rd best film award at India International Science Film Festival (IISFF 2017).
Zojila is a high mountain pass in Jammu and Kashmir, located on the National Highway 1D between Srinagar and Leh in the western section of the Himalayan mountain range.
The documentary film narrates the life of Anayatullah Khan, 45, nicknamed Tulla who was born as a special kid to a shepherd family at Sonamarg. Tulla is unable to hear and speak. But Tulla is well prepared for such eventualities. He was born and brought up under the circumstances where life and its necessities teach a harder lesson in practice, sweat and blood. Tulla is a bulldozer driver and works at the Zojila pass to clear boulders, fifty feet high snow avalanches, cutting mountain patches, under the shooting stones so as to open the Srinagar-Leh National Highway after the six months of winter. He is a front man earthmover operator. “Tulla has never been to school for basics, brought up as a deprived and unprivileged boy without two natural inevitable abilities of a normal human being. Having restricted communicational ability and understanding, without which human skill, capability, capacity, aptitude, knack, proficiency, power, talent and aptitude becomes contemptible, but Tulla is altogether diverse, special and praiseworthy, miles ahead of normally privileged human beings. His story is that of unmatched strength, brilliance and courage,” Jalal Ud Din Baba told TCN. The documentary has won the 3rd Best Film Award Competitive Film Category (A) for its green activism, film mastery, the remarkable art of storytelling, treatment and rare maturity of the filmmaker in his ability to trail the daily activity of his specially-abled protagonist Anaytullah Khan at Zojila.
(Tworcircles.net)