Lean takes us inside the minds of the manufacturers of Islamophobia “ a highly-organized enterprise of conservative bloggers, right-wing talk show hosts, evangelical religious leaders, and politicians in the United States.
The Islamophobia Industry
How the Right Manufactures Fear of Muslims
By Nathan Lean
Pluto Press, London
222 pages, $ 17 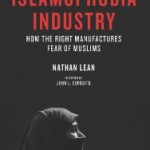