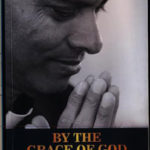 The book is a stirring account of Fr. Tom’s days in captivity in war-torn Yemen, the process that led to his release and his eventual return to India.

On 4 March 2016, a group of terrorists barged into the care-home for destitute people run by Catholic nuns in poverty-stricken, war-torn Yemen. They shot dead 16 people, including 4 nuns and several locals, and kidnapped a Catholic priest from India. In this book, this priest, Fr. Tom Uzhunnalil, recounts significant aspects of and events in his life, including his 557 days in captivity.
This is a stirring account of the life of a man who seeks to live for God. Explaining why he chose to write his autobiography, Fr. Tom says: “The purpose of chronicling my experiences is in no way to create an impression that I am a saint or superhero. In fact more than anyone else, I can testify that I am far from all that. But I felt strongly impelled to write on my experience of the protection and mercy of God especially during the time that I was in captivity.”

Serving the Poor
Fr. Tom’s narrative of his life is not a mere record of some of his crucial achievements and experiences. Rather, it is a testament to the work of God in guiding him through life. As he says, “Looking through the past years right from my childhood up to the present moment, I could find my God walking with me, taking care of me, not only in moments of joy but also in the most difficult situations of life. Even when there seemed no hope, He filled me with hope and courage. At times, when the prayers were seemingly unanswered, He held me close to Him”¦While He gave me trials on one side, He strengthened me with graces on the other. I knew that the Lord would act in His own time…”
Born in a village in Kerala in a pious Catholic farmer family, Fr. Tom recounts his loving family, teachers who instilled in him virtues, and his desire, at a young age itself, to devote himself to God. We learn about the process of his formation as a Catholic priest and about the work he went on to do in different parts of India, in institutions serving the poor.
A major turning point in Fr. Tom’s life came when he was posted to Yemen, where he served members of the country’s miniscule Catholic population and also at the homes for the destitute run by Mother Teresa’s Sisters. We get a glimpse of how challenging his work was, given the raging civil war in the country at this time. The narrative then moves on to the tragic events of that day in 2016, when a group of terrorists stormed the centre run by the Sisters in Aden and, after killing several people, kidnapped Fr. Tom.

Personal Connection with God
How did Fr. Tom survive that harrowing time, for some 18 months? It was none else but God, Fr. Tom explains, who saw him through. Fr. Tom’s deep personal connection with God helped him to carry on without losing hope. “My abduction, I believe, was transformed by my life of prayer”, he says. “I really never felt despair during these moments”, he explains. “I lived one day at a time. Thus, I never felt that it was unbearable. The Lord was helping me moment by moment. It was all in His plan. I knew for sure that the prayers of several were backing me up. After my release, I learned that several thousands of people across the world prayed and made sacrifices for my sake. Among the innumerable people, there were also brethren of other religions incessantly praying for me. No wonder, I felt fearless in facing the unknown.”

Profound Spiritual Lessons
Fr. Tom’s description of his days in captivity, the process that led to his release and his eventual return to India take up a major portion of the book. What is especially noteworthy in this regard are some profound spiritual lessons that Fr. Tom offers, based on his own experiences. To quote him:
“Each one of us has a mission to accomplish. I have a mission and that is to serve the Lord till the end, even at the cost of my life.”
“It does not matter how and where I die, but what matters is what I live, serve and die for.”
“My mission now may be to witness to the truth that the Lord God is one who hears and answers our prayers.”
“Ensuring the right alignment between our plans and God’s will for us is very important to stay fulfilled in life. It calls for constant self-examination. ‘What does God want me to do in this given situation’ is a question that all of us must constantly answer in our conscience.”
“…[A]fter I was released and reached home safe, I realized that my mission is to be a witness to the fact that the Lord alive hears our prayers and that he would surely answer them in his own good time. I realize that I am a living proof that our God still loves us and cares for us. The One who knew me before I was born, formed me in my mother’s womb and called me to follow Him closely is ever at my side, strengthening me. My whole life has been an experience of His presence walking side by side with me.”
This is a moving account about and by a very remarkable man and definitely worth reading.
(Extracted from newageislam.com)
(P. Joy is a Bangalore-based nature lover and occasional writer, with a particular interest in interfaith issues)