Islamic Voice 0 December, 2015 12:00 am
Investigative Study of a Reprehensible Practice
A Little Book with Loads of Wisdom!
A New Perspective on Love, Loss, Happiness and Pain!

The Medieval Arabs preserved the then known sciences like astronomy, chemistry, medicine, mathematics and optics, through the process of translation accompanied with original contributions of the highest calibre. 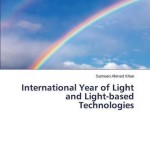 In December 2013, the United Nations designated 2015 as the International Year of Light and Light-based Technologies (IYL). A number of major scientific anniversaries are being celebrated in 2015, starting with the encyclopedic works on optics by the Islamic scholar Ibn al-Haytham in 1015. Dr. Sameen is a Member of the Working Group, “Ibn Al Haytham” set-up by the ‘International Steering Committee’ of the International Year of Light and Light-based Technologies. The book under study is the first book on this topic. The book traces the history of optics from the early Egyptian and Greek civilizations to the present. Then lucidly describes how the ancient knowledge of optics reached the Arab lands in the eighth century. The Medieval Arabs preserved the then known sciences (astronomy, chemistry, medicine, mathematics, optics, etc.) through the process of translation accompanied with original contributions of the highest calibre. Over half the book is dedicated to the Medieval Arab achievements in optics, during the Islamic Golden Age (eighth to the thirteenth centuries). Ancient science and philosophy preserved in the Greek, Sanskrit, Pahlavi and Syriac languages would have been lost forever, had the scholars centred around Baghdad during the 8th-12th centuries not translated them into Arabic. Later on, the knowledge preserved in Arabic was translated into Latin and other European languages. This paved the way for the European Renaissance. Contributions of the contemporary science historians such as Abdelhamid Ibrahim Sabra and Roshdi Hifni Rashed are described in detail. They examined and translated the Arabic manuscripts from antiquity (lying in the museums) into French and English and thus shedding new light on the Arab contributions to sciences and optics in particular. A detailed account of these developments is presented. The book has an appendix outlining the history of modern optics from the 13th century to current times. The current developments are covered such as the ones leading to the optics related 2014 Nobel Prizes in Physics and Chemistry. So, also the 2015 King Faisal International Prize, which is also related to optics by a remarkable coincidence. 20th century was marked with the remarkable development of Accelerator-based Light Sources. These developments are described and the author persuasively presents the need for an International Year of Particle Accelerators and Accelerator-based Technologies (IYPA).
Arab Contributions to Science
The author states, “It is high time to recognize the Medieval Islamic Achievements in Optics and other sciences and give due credit, which they rightly deserve. There have been numerous conferences on Arab Contributions to Science. But this era of golden history is yet to find a mentionable place in school textbooks.” The author further urges, “It is time for the Arab and Islamic countries to reflect on the decline of science in their nations and look forward to turning a new leaf. It is time for them to come up with realizable schemes to revive the tradition of learning and enquiry as enshrined in Islam. Such a revival will not be possible without the generous funding and the government patronage. It is time to build international science centres in the Arab and Muslim countries, possibly modelled after the international European institutions.” As of August 2015, we had 93 National Nodes which are organising local campaigns, activities and events. What about the remaining hundred-odd countries?
The book could have included the “Medieval Islamic Achievements in Optics” in its title or subtitle. The book has 172 references many of which belong to the author! This is not surprising since the author has been working in optics since 25 years and has extensively published on different aspects. The book has concisely covered the very ancient to the contemporary and has even attempted future insights! The book shall be very useful to one and all: popular science readers; historians; students; teachers; researchers; and mostly importantly the policymakers.
(Dr. Azher Majid Siddiqui is at the Department of Physics, Faculty of Natural Sciences, Jamia Millia Islamia, New Delhi ([email protected], www.AzherMajidSiddiqui.webs.com/)