Islamic Voice 0 December, 2016 12:00 am
A Multifaith Spiritual Guidebook
Capturing the Saga of Transition
A Memoir of Travels and Travails

The close friendship between the co-authors of this deeply-insightful book, a Jewish rabbi, Christian pastor and Muslim imam, is cause for much celebration, reminding us of the immense power of spiritual friendship across conventional religious boundaries. 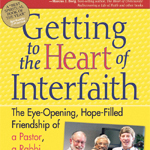 Judaism, Christianity and Islam, known as the three ‘Abrahamic faiths’, share much in common. Yet, despite (or, perhaps, because of) this, relations between those who claim to be their followers have been marked by conflict through much of history. This continues to be the case today too, in large parts of the world, with ominous consequences for global peace. In this context, then, the close friendship between the co-authors of this deeply-insightful book, a Jewish rabbi, Christian pastor and Muslim imam, is cause for much celebration, reminding us of the immense power of spiritual friendship across conventional religious boundaries that can unite people into a force for interfaith peace and harmony.
The authors are an interfaith team who travel together, in the USA (where they are based) and elsewhere, reaching out to people with the message of interfaith harmony. In this book, they recount what might seem their unlikely friendship, that began in the aftermath of the devastating 9/11 attacks, which prompted them to work together as a team to promote better relations and mutual understanding between people of different faiths, particularly between Jews, Christians and Muslims. Reflecting on how their relationship developed and unfolded over the years, they indicate the powerful role that friendship between individuals can play in promoting meaningful interfaith dialogue, and how it can enable people from different faith backgrounds to grow spiritually together, as a team. In the course of this journey, friends can learn about each other’s faiths, overcome biases, rethink difficult aspects of their own religious traditions (often, as a result of inspiration from friends from other faiths), and learn to discern and appreciate the goodness in other traditions, in this way, evolving together in their relationship with God.

Overcoming Fragmentation and Conflict
Based on their long experience of working for amity across religious divides, the authors tell us that interfaith harmony and overcoming fragmentation and conflict between people who claim to follow different religions are now a matter of sheer survival for humanity today. They draw our attention to the fact that “In our day, it appears that religions are at the heart of some of the world’s most brutal conflicts. Religion seems to be fuelling hatred rather than expanding love. Each religion seems to be projecting a God in its own image, interpreting ancient words through its own filters. What was meant to unite us is used to divide.” “This”, they explain, “is the challenge of interfaith dialogue and collaboration.”
While dogmas and rituals set apart one religion from another and distinguish religious communities from each other, what unites them are commitments and values that are common to all major religions. Focussing on the latter, the authors tell us, can help bring people of different faiths together despite their religious differences, forming the basis of what the authors call ‘inclusive spirituality’. This spirituality, they say, holds the key to healing the wounds of people and the planet as a whole. It harkens us to a realization of the interconnectedness of all beings, which expresses itself in concern for their welfare and of the planet as a whole.
“For us”, the authors explain, “inclusive spirituality relates to the realization of Oneness, the Oneness toward which each of our faith traditions leads us. The One we seek is a shared One”there is only One. We believe the One, usually called ‘God’ or ‘Allah’ in our three faith traditions, is the One Universal Life that contains all that exists, yet is infinitely more than all that exists. To the extent that we realize ourselves as integral parts of that One, we are moving toward the spiritual side of the scale.” “In our interfaith work”, they explain, ” we have realized again and again that the more deeply we share, the better we are able to appreciate the Universal we all seek to serve.”
An ‘Inclusive Spirituality’
Promoting an ‘inclusive spirituality’ does not mean ignoring the very real differences between the different religions. In fact, the authors stress, not recognizing and talking about these differences ‘really does not help’. The challenge in interfaith conversation is to help people of different faiths develop and deepen an ‘inclusive spirituality’ despite their different belief systems, in this way lifting the conversation to a spiritual and more universal level. “By its very nature”, the authors say, ‘inclusive spirituality’ “embraces differences and makes no demand that we all believe the same things. It takes us beyond our particular beliefs into shared values of love, compassion, and peace, toward which we are all striving”, values that “transcend the boundaries of our different traditions.”
The book describes interfaith dialogue as a process that passes through five phases. Firstly, when people of different faiths move beyond separation and suspicion to get to know each other as individuals. Secondly, inquiring more deeply about each other’s faiths, which leads to greater mutual appreciation of these. Thirdly, sharing both the ‘easy’ as well as ‘difficult’ parts of each other’s religious traditions (supremacism in the name of religion, communal exclusivism and subjugation of women being common instances of the latter). Fourthly, moving beyond ‘safe territory’ to creatively deal with issues that have pitted religious communities against each other. And, fifthly, exploring spiritual practices from other religious traditions.
Today, interfaith dialogue and working together for peace and understanding are no mere academic luxury. “It’s time”, insist the authors, “We need each other more than ever, for we understand how much we share”¦We are in this together”¦We dream of a world awakening to the essential Oneness that contains us all. It’s a matter of our survival.”
This immensely useful book is a beautiful testimony to the power of spiritual friendship in dissolving barriers and biases and in bringing people of diverse faith backgrounds to recognize their common humanity and their one Creator and to recognize their responsibilities to both.