A Blueprint for Community Building

Islamic Voice 0 September, 2013 12:00 am
New Arrivals
India’s Voice at the United Nations – Speeches by E. Ahamed
Religion as a Form of Conflict-Resolution 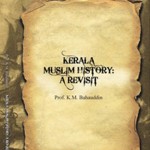