Islamic Voice 0 June, 2018 12:00 am
Communicating With Allah
Relapse into Darkness
A Fascinating Account of a Very Eventful Life

This is a beautiful, must-read book for everyone concerned with how the world is going.

The Dignity of Difference: How to Avoid the Clash of Civilizations
By Jonathan Sacks
Continuum, London and New York 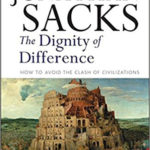 Former Chief Rabbi of the United Hebrew Congregations of the Commonwealth, Rabbi Jonathan Sacks is a prolific writer and thinker. He is also one of the most inspiring voices for interfaith understanding today. In this book, the Rabbi makes a plea for interfaith solidarity to counter the current threats to humankind. He rightly says: “I see in the rising crescendo of ethnic tensions, civilizational clashes and the use of religious justification for acts of terror, a clear and present danger to humanity. For too long, the pages of history have been stained by bloodshed in the name of God. Allied to weapons of mass destruction, extremist religious attitudes threaten the very security of life on earth. In our interconnected world, we must learn to feel enlarged, not threatened by difference.”

A Force for Peace
Today, the Rabbi says, a crucial question before us is whether religions can become a force for peace rather than a source of conflict. That, he says, depends on how different faiths and cultures make space for ‘the other’. He suggests that people need to move away from seeing the other as a threat to their beliefs and way of life and, instead, regard them as an “enrichment of the collective heritage of mankind”. In this regard, he points out: “Religion can be a source of discord. It can also be a form of conflict resolution. We are familiar with the former; the second is far too little tried. Yet it is here, if anywhere, that hope must lie if we are to create a human solidarity strong enough to bear the strains that lie ahead. The great faiths must now become an active force for peace and for the justice and compassion on which peace ultimately depends. That will require great courage, and perhaps something more than courage: a candid admission that, more than at any time in the past, we need to search”each faith in its own way”for a way of living with, and acknowledging the integrity of, those who are not of our faith. Can we make space for difference? Can we hear the voice of God in a language, a sensibility, a culture not our own? Can we see the presence of God in the face of a stranger?”
The Rabbi has some very pertinent advice to offer: “When religion is invoked as a justification for conflict”, he says, “religious voices must be raised in protest. We must withhold the robe of sanctity when it is sought as a cloak for violence and bloodshed.” In other words, “If faith is enlisted in the cause of war, there must be an equal and opposite counter-voice in the name of peace.”
For people of different faiths to live in harmony with each other, the Rabbi suggests we need to recognize the image of God in people who follow faiths other than the one we identify with. Also, recognizing that God is worshipped in diverse ways in different religions, we need to understand “the dignity of difference” and recognize “why no one civilization has the right to impose itself on others by force: why God asks us to respect the freedom and dignity of those not like us.”

A Paradigm Shift
The Rabbi says that what he terms as “nothing less than a paradigm shift” may be needed “to prevent a global age becoming the scene of intermittent but destructive wars”. In this regard, he explains: “I believe each of us within our own traditions, religious or secular, must learn to listen and be prepared to be surprised by others. We must make ourselves open to their stories, which may profoundly conflict with ours. We must even, at times, be ready to hear of their pain, humiliation and resentment and discover that their image of us is anything but our image of ourselves. We must learn the art of conversation, from which truth emerges not by the refutation of falsehood but from the quite different process of letting our world be enlarged by the presence of others who think, act and interpret reality in ways radically different from our own”.
God, the Rabbi tells us, “transcends the particularities of culture and the limits of human understanding”. “He is my God but also the God of all mankind, even of those whose customs and way of life are unlike mine”, he writes. By developing this understanding, people of faith might remain secure in their own religious tradition but yet can be moved by the beauty in other religious traditions too. “Those who are confident in their faith are not threatened but enlarged by the different faith of others”, the Rabbi says. “In the midst of our multiple insecurities, we need that confidence now”, he stresses.

Stronger than Toleration
“Something far stronger than toleration is required”, the Rabbi says, for peaceful relations between adherents of different faiths today. And this something, he writes, must “come from within the great religious traditions themselves”, he says.
The idea of the dignity of difference does not mean relativism, the Rabbi explains. It is based on God’s transcendence of God from the created universe, with its astonishing diversity of life forms, all of which derive from a single Source. The Rabbi suggests a “test of faith” being whether believers in God can make space for difference. “Can I recognize God’s image in someone who is not in my image, whose language, faith, ideals, are different from mine?” he asks, adding, “If I cannot, then I have made God in my image instead of allowing him to remake me in his.”
The Rabbi suggests that recognizing the divine in the other is the way to develop respect for the other. “I believe”, he tells us, “that we are being summoned by God to see in the human other a trace of the Divine Other.”
This is a beautiful, must-read book for everyone concerned with how the world is going.