Universe is Inexplicable without God

Islamic Voice 0 August, 2018 12:00 am
Enchanting Nuggets of Islamic Lore
The Men and Woman Who Ruled Pakistan
“The Apprehensions of Indian Muslims and Dalits”

This book brilliantly shows how science and faith in God can go hand-in-hand. 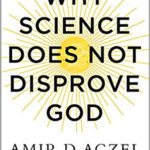 Some atheists might claim that science has discovered that God is a myth and that, therefore, believing in God is absurd. The fact of the matter, however, is that science just cannot do that sort of thing (but neither can it conclusively prove God), as this engaging book by  the late Amir Aczel (d. 2015), one-time visiting scholar at Harvard University, research fellow in the history of science at Boston University and teacher of Mathematics at the University of Massachusetts, highlights. Aczel not only offers a convincing rebuttal of claims regarding science allegedly disproving God but also provides scientific insights that seem to indicate that the Universe is inexplicable without God. This book brilliantly shows how science and faith in God can go hand-in-hand.

Consciousness and Symbolic Thinking
Aczel highlights several facts about the Earth and the larger world beyond our little planet that clearly show the hollowness of atheists’ claims, on the one hand, and that, on the other hand, could possibly indicate the existence of the Power or Being that we call God. For instance, he points to the fact that science has not been able to create living beings from inanimate chemical elements. He refers to the amazing fine-tuning of the Universe (which means that it is improbable that it could come into being without a Creator, just by chance, as many atheists believe). He contends that the phenomenon of what is called the Big Bang indicates that the Universe had a definite beginning. This fact also suggests that the Universe must have had a Creator while disproving the claim of non-theists who argue that the universe had no beginning and that it was always there. Aczel also refers to human consciousness”one of the most formidable hurdles in the path of atheism. The emergence of consciousness, language, intelligence and symbolic thinking isn’t understood by science, Aczel explains, and no scientist has so far explained satisfactorily this miracle.  “We have no good explanation of how consciousness and symbolic thinking came about. These may well be described as divine gifts”, Aczel writes.
In order to back their claims regarding science and God, many atheists argue that many prominent scientists are not religious. Aczel regards this as a wrong claim. “This kind of statement is deceptive,” he says. Aczel acknowledges that many “independent-minded people and intellectuals do not like the prescriptions and rituals of organized religion” and that it is “certainly true that religions are tradition-bound institutions that frequently have been antagonistic to change”both social and scientific.” “But that,” Aczel tells us, doesn’t mean that many scientists don’t see in nature and beyond it “a force that is unknown to us and unknowable”.
In contrast to those atheists who see nothing positive in religion, Aczel refers to the important roles that spirituality, religion and faith can play in our lives. “They keep us humble in the face of the great wonders of nature; they help maintain our social values, promoting the care of our weak and poor; and they provide hope and some moral code in our ever more complicated modern world”, he writes. “Science and spirituality are both integral parts of the human search for truth and meaning; they provide us possible paths of comprehending and appreciating the vast cosmos and our place in it.”
Aczel doesn’t claim that he has convincingly proved the existence of God”but that isn’t his purpose here. What he seeks to show”and this he does impressively”is that science has not proven the non-existence of God. He doesn’t deny that religion as a human institution can have its flaws. “But”, he explains,  “God”a power well outside our ability to comprehend, transcending the creation of the universe we see around us”may well exist, and science has not, and will not, disprove it.”