US Servility to Israeli Objectives

Islamic Voice 0 September, 2016 12:00 am
Conversation about Faith in God
A Beautiful Testimony to the Power of Spiritual Friendship
BJP’s Classic Failure on Governance Front 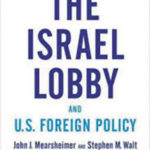 It is an unusual book, coming as it does from a western publisher. Mustering courage to define the Israeli lobby”the book only uses the term ‘Israel Lobby'”its evolution in the United States and extension of its arms into every conceivable corridor, nay nooks and crevices of the American policy, it exposes the massive clout the Zionists lobby wields in the most powerful democracy of the world.
It is no mystery that Israel not merely defies the United States, but also dictates the line it wants the global cop to follow even to the extent of ignoring its (US’s) own national interest and gets done all that it desires to do to its neighbours.
Jews make up not more than three per cent of the America’s population. They are more educated and more prosperous than the general population. They have a high turnout rate in elections and are concentrated in key states like California, Florida, Illinois, New Jersey, New York and Pennsylvania which increases their weight in determining who becomes president. Though Jews form the core of the Israeli lobby, it cannot be solely defined with reference to faith and community. A good part of the Christian Zionists too are part of the lobby.

Favours and Freebies
It is vital to understand that the Washington’s Middle East policy is shaped by the power of the Israeli lobby within America and totally ignores the misconduct of Israel. Israel bombed Iraqi nuclear reactor at Osirak in 1981; annexed the Golan Heights (belonging to Syria) in December the same year; invaded Lebanon in 1982 and rejected Reagan Plan for Peace in September 1982. Yet it faced no reprisals. Not alone this. It was rewarded in multiple ways with favours and freebies without any scope for candid discussion. Israel and US have joint Anti-Terrorism Working Group (formed in 1996); an electronic hotline functions between Pentagon and Israel’s Ministry of Defence; Israel has access to the US satellite based missile warning system (since 1967); the two states have an intelligence-sharing system in place (since 1950); Israel maintains active chemical and biological weapons programme and is yet to ratify the Nuclear Non-Proliferation Treaty (non-compliance of which led to US sanctions on several countries including Iran).
Such has been the condescending attitude that the US even ignores the openly hostile Israeli actions against itself (the US), e.g., Israeli agents tried to bomb several US offices in Egypt in an attempt to sow differences between Egypt and the US; Israel sold military supplies to Iran while the US hostages were being held captive there; Israel purchased $36 million of Iranian oil in 1989 under a barter for release of Israeli hostages in Lebanon; it transferred American arms technology to China, a potential adversary of the US; and devastating espionage against US by Israeli spy Jonathan Pollard (imprisoned in 1984 and released recently after 30 years).

Largesse Continues
But American largesse has continued undeterred. Washington has vetoed 42 UN Security Council resolutions critical of Israel between 1972 and 2006. This number is greater than the combined total of all the vetoes cast by all the other permanent member of the Security Council in the same period. Every invasion by Israel has only brought it more diplomatic aid and military as well financial assistance. The US has been blocking the issue of Israel’s nuclear arsenal on the agenda of International Atomic Energy Commission (IAEA) every time the Arab neighbours have tried to push it. Since 1976, six Israeli leaders have addressed joint sessions of the Congress, a higher total than for any other country.

More a Liability than Asset
The authors comprehensively demolish twin pleas for relentless American support for Israel for being a strategic ally in a region festering with ‘rogue states’ and moral imperative for supporting a state that has been victim of the Holocaust, shares political values with the US, being only democracy in the Middle East and an island of civil liberties. Israel’s usefulness to the US between 1967 and 1989 (collapse of Soviet Union) could be understood but not beyond. In fact during the first Iraq War it had to be kept aloof lest the coalition against Iraq could get jeopardized. Israeli belligerence in the unipolar world only exacerbated anti-Americanism in the Arab street and the Islamic world which is clearly a liability than an asset.
Similarly, the theory of Israeli partnership against terrorism also loses justification. Some of the Arab states cultivate terrorists to counter Israeli excesses and they are dangerous because US’s unquestioning commitment to Israel is the cause of their being dangerous. Moreover, when the US could make common cause with mass murderers like the leadership of China and Russia and remain ally of despotic Arab sheikhdoms and Nuclear Israel, why not deal with Iran, Iraq, Libya and Syria on similar terms which are only ‘minor rogues’. All these only lead us to conclude that strategic and moral rationale for American support for Israel is extremely weak.

Working Overtime
The authors debunk the myth that the US media is controlled by the Jews but do concede that Israeli lobby works in a variety of ways to silence the critics; works overtime to cultivate positive image of Israel among the general populace; organizes all-expenses paid trips to bring hundreds of university students to Washington DC to listen to the Israeli lobby; tars the critics with the charge of anti-Semitism (something increasingly getting devalued due to overuse); and has developed vested interests in portraying Israel as beleaguered and vulnerable inasmuch as today Israel has become a need for their own viability and existence. No wonder then why a Pew survey in 2005 found that 39% of Americans considered American support for Israel a major cause for global discontent. Stifling criticism of Israel to cultivate sympathy in the US has now become an industry to the extent that criticism of Israel cannot even be imagined.

Weak Arab Lobby
One could genuinely question as to why wealthy Arabs cannot counter the Israeli lobby within the US. Arab lobby is mainly represented by Arab-Americans who are too weak and too divided into disparate groups to be focused like Israeli lobby. Arab lobby’s support in the US is not indigenous, they have to rather hire professional lobbyists. Even the threat of cutting off oil supplies from Arab countries does not work because it would only deprive the dictatorial sheikhdoms of much oil revenues that they need to remain in power. Secondly, unhinging with the US is impossible as wealthy Sheikhs have sizeable investments in the US and economic downturn in the US economy would hurt themselves. Third, reduction in oil supplies would trigger a shift to alternative energy sources which would then become more attractive.

Relook at Servility
Having fought Israel’s enemies in the Middle East for nearly two decades, US finds itself in a deep muddle. Iraq has been deeply destabilized and ruled by the Shias who are more amenable to Iranian advice, something contrary to Iraq under Saddam. Of late, things are turning in favour of minority Alwite regime of Bashar al-Assad in Syria after five-year civil war. Anti-American forces like Hezbollah, Nasrullah and Hamas are much stronger today than they were two decades ago. Besides a host of terrorist bodies like Al-Qaeda, Al-Jihad al-Islami and ISIS are running amok through the chaotic Levant. Suicide bombings are the order of the day and threatening peace more than ever. The US is far from transforming the Middle East the way it imagined and Israel’s security has been compromised more seriously at the hands of non-State actors than the despots who ruled earlier. Is it not the time for the Americans to shun the Israeli servility and have a relook as to where they have been led in pursuit of objectives of the Israeli state?