Islamic Voice 0 July, 2013 12:00 am
A Beautiful Testimony to the Power of Spiritual Friendship
Ghettos or Ethnic Enclaves?
How Science Reveals God 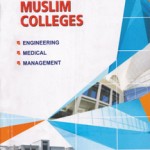 Educational activist Saiyed Mohammed Ali from Surat has compiled the All India Directory of Muslim Colleges. He has undertaken the painstaking job of collecting the data about professional colleges being run by the Muslims across the country. These principally include medical, engineering and management colleges. But list of medical colleges also includes related institutions such as dental, pharmacy, nursing, Unani and physiotherapy colleges. Likewise, Polytechnics find mention under engineering colleges. Since most of these institutions are concentrated in South Indian states and Maharashtra, the Directory may find use by seekers of such information in North Indian states. Unfortunately not many such colleges exist in Hindi states where live as many as one-third of India’s Muslims. This was mainly because of their lack of resources and partly because of the stinginess in sanctioning of such institutions by the state governments.
The Directory brings to relief the lopsided development of professional educational institutions in India. The Andhra Pradesh Muslims have set up as many as 50 engineering colleges while their number in Bihar does not exceed three. Kerala has 11 Muslim-run dental colleges while Maharashtra Muslims are yet to have a Medical college.
The Directory skips mention of these professional colleges in Aligarh Muslim University and Jamia Millia Islamia which are central universities. It would have been better to include even these as they are principally established to cater to needs of Muslims.  Even law and teachers training colleges could be brought under the Directory. The author cannot be faulted for a few missing names such as Brindavan College of Engineering, Yelahanka Bangalore as they could be hardly identified by their names as Muslim institutions.
The Directory is expected to help both students who are looking for opportunities in professional education, and institutions which find fewer takers for their seats. The publisher deserves kudos for the stupendous effort.
A little more attention towards accuracy of names and spellings of names would go a long way in improving the quality of the work.