Young Girls Set Up A College 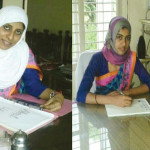 Just imagine two fresh graduates from a college setting up a degree college of their own! It may sound incredible!
But here is the duo running a full-fledged college in Kadaba village of South Canara district which will be sending its first batch of students for final year degree exams next May. The college which started out as a tutorial institute in 2012 for dropouts, has 180 students on its rolls today.
Samira K.A. and Fouziya B.S. were hostel mates in Mangalore University in 2012 while pursuing their Masters. Samira was doing MA in Political Science while Fouziya was going MA in Kannada. They hailed from middle class families in Kadaba and Athoor villages in Puttur, about 100 kilometres east of Mangaluru. Not merely the rooms, they even shared concern over high dropout rate among high school students in their villages and lack of opportunities for education beyond Pre University stage. They decided to set up a tutorial institute for coaching in the village soon after they returned there after completion of studies.
The idea bore fruit as a kind-hearted property owner from the village, Sundar Gowda offered them his building to start the proposed institute. He even waived off the rent for the initial three months. They began the work earnestly with word of mouth bringing a lot of students. The duo took up teaching with other women degree-holders also offering services voluntarily. Initially it was merely coaching students for preparation for SSLC and PUC exams and was named AMS College, joining initials of their mothers’ name.
But soon they realized that the village held immense potential for a degree college as the nearest degree college was in Uppinagadi, 30 kms away. Distance from the village kept the students, especially the girls, from pursuing their dream of higher education. Though there were many who doubted their (Samira and Fouziya’s) capacity to run the college, some of the village elders encouraged them to go ahead with their plan to set up a degree college. Lo and behold! The next June saw Aims Degree College opening its portals in Kadaba village. They could enroll ten students initially. Some effort resulted in even Mangalore University giving the college recognition.
Subsequent years saw the trickle becoming a torrent. They named it Aim’s Degree College. It admits both boys and girls, Muslims and non-Muslims. Samira told Islamic Voice over phone that students from all communities are welcome. But medium of instructions is English, although the lecturers are directed to explain the concept in Kannada too. Most Muslim families belong to Beary community, for whom Beary language is the mother tongue but generally receive school education through Kannada medium.
The Aim’s College currently offers BA and B.Com courses and provides coaching for SSLC and PUC. Samira has pulled in her sister Sajida too, who is pursuing her M.Sc from Karnataka State Open University after her B.Sc and MA courses.
Samira, who is the Principal of the College, says several girls from poor families are not able to pay their tuition fee which has to be compensated from donations. With nine rooms, two office rooms and a library, Aims College employs 16 teachers, 12 of them being women. Samira informs that Aims First Grade College has applied for government land for constructing the college building but there are issues to be resolved before it is allotted.
The young girls who are in their mid-20s, are confident that they would overcome all the hassles. They say they have risen from humble origin but have the capacity to offset this with their passion and drive.
They can be contacted at Aim’s First Grade College, Kadaba, Puttur taluk, D.K. Dist., Karnataka, PIN: 574221, College Ph: 08251-260299, Samira K. A., Cell: 99005-49055, Fouziya B.S., Cell: 84968-97055. Email: [email protected], website: www.aimskadaba.org