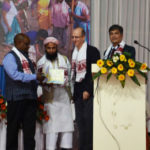 Mufti Nasihur Rahman, principal of Al Jamiatul Islamia Banat Madrassa in Assam’s Mangaldai, calls himself a swachchta doot (‘cleanliness agent’) and uses his position and influence to inspire thousands to adapt to hygiene and cleanliness. No wonder, he has struck a chord with the audience. “Rahman saab talks of cleanliness and related issues during the Friday prayers when many people gather in the mosque. It is great to see a religious leader playing the role to bring a change in the society like this which is not so common,” says Ashraful Islam, a college student who attends Friday prayers with Rahman.
Rahman’s initiative has drawn much appreciation from people across the state. “We need more maulanas like him who talk about social issues and the larger good of society. Sanitation is an issue that concerns us all. If they are actively involved in issues like water, sanitation, and environment, they can usher in a behavioral change. This will, in turn, lead to building a strong country,” Teresa Rehman, a Guwahati-based journalist says.
Rehman started his cleanliness mission more than four years ago. Initially, a section of people tried to mock at him for preaching on cleanliness being a cleric, but many in the neighbourhood and followers appreciated his work. He says that he has witnessed change among the people after he started his campaign of cleanliness. Recently, Rahman conducted a cleanliness awareness camp at Dalgaon madrasa in Darrang district where around 200 students and locals attended. “
(Extracted from twocircles.net)

April 1, 2020
Ayishakutty, 91, the first woman panchayat president from the Muslim community in Kerala,passed away recently. A native ... More
Prev Post The Muslim Youth of Today
Next Post Poor Participation of Muslims in Training Programmes