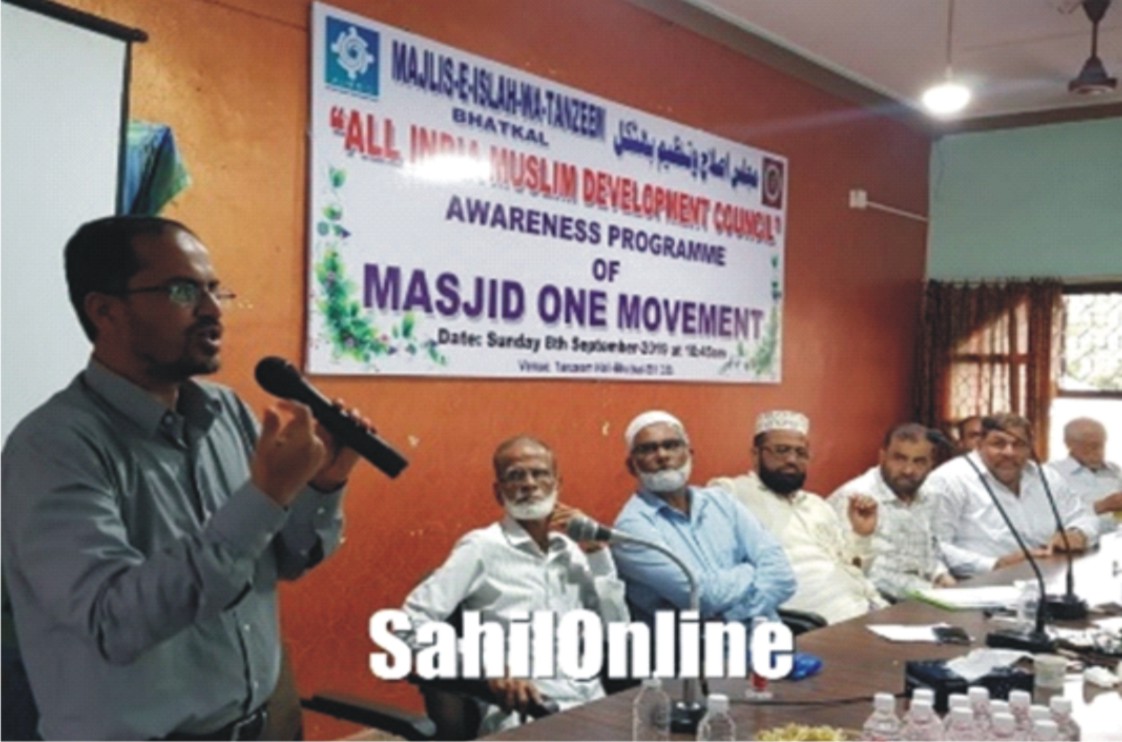 To revive the Islamic tradition of making Masjids the centre of all issues be it religious or worldly matters, 2022 will see the roll-out of the ”Masjid One Movement ” in Gujarat. As a masjid is the easiest way to reach the community, around eight masjids in Ahmedabad will see the implementation of the project in a phased manner.

On December 5 (2021), the All India Muslim Development Council (AIMDC) meeting was organized at the Masjid-e-Saiyeda-Sakina in the Juhapura area of southwestern Ahmedabad.
The AIMDC is spearheading the Masjid One Movement, and around 500 people, including 200 women, attended the programme. A separate sitting arrangement for the women was made in the basement of the Masjid.

The fundamental idea behind the Masjid One Movement is to revive the Islamic tradition of making the Masjid the centre of all issues – be it religious or worldly matters, as the Masjid is the easiest way to reach the community.

To begin with, a Masjid One Movement pilot project will start at the Faiz-e-Mohammed society masjid in the Paldi area of Ahmedabad, followed by the Sarita Kunj masjid and then other mosques.
“We have already started at Hyderabad, Mysuru (Mangalore), and in other parts of Karnataka and Maharashtra. Now we are ready to launch a pilot project in Ahmedabad,” said AIMDC General Secretary Mohammed Imtiyaz while talking to a news portal.

The Masjid One Movement is the brainchild of Mohammed Imtiyaz. He worked on the project for several years and personally contacted ‘ulemas’ (religious scholars) of different schools to bring them under a common umbrella. The first meeting of the Masjid One Movement was organized in Bengaluru in 2018.

A periodic review of the work undertaken by different masjids would be done by the Masjid One Movement. Also, an assessment would be done on which Masjid has done what type of work which masjids lagged in work, and what steps should be undertaken to do away with the shortcomings.

Explaining the fundamental idea behind the Masjid One Movement, Uves Sareshwala, a member of the AIMDC Executive and Advisory Committee, said: “We just don’t want to identify the problems faced by the Muslim community, but we want to bring about a solution to these problems by making the masjid as the central hub.”

Under the Masjid One Movement, the first thing to be undertaken is the collection of data about Muslims residing in the proximity of different masjids. From details about the ‘maslak’ (doctrine) to health issues, education, finance, and the community’s businesses, their financial and economic condition and all such details would be collected.

According to Qasim Rasool Ilyas, one of the AIMDC secretaries of the Masjid One Movement, the Movement has embarked upon a project to make the Masjid a centre of unity amongst Muslims. “It is not an easy job, and we will have to involve many people at different levels, and also it is a long term project,” he added.

Under the project, every Masjid will have to form its committees, and the Masjid One Movement will provide the requisite guidelines. After that, the Masjid would do all that needed to be done at its own discretion.

A periodic review of the work undertaken by different masjids would be done by the Masjid One Movement. Also, an assessment would be done on which Masjid has done what type of work and which masjids lagged in work, and what steps should be undertaken to do away with the shortcomings.

At the December 5 (2021) meeting in Ahmedabad, perhaps one of the most important developments was Uzma Naheed’s address as a member of the AIMDC. As a social activist and founder of India International Women’s Alliance (IIWA), Uzma Naheed raised the status of women in the Muslim society and requested the religious scholars in the society to consider awarding essential roles to women in the Movement.”

In her 10 minutes address to the clerics, Naheed, who is also a member of the All India Muslim Personal Law Board, put forth anecdotes from Islamic scriptures where women were consulted for various issues, drawing parallels to the present-day society where Muslim women do not enjoy the same status in India. ”

Masjid One project discusses how we adapt to the changing times and deal with multi-dimensional problems facing us today. Specifically.

AIMDC also published a statement on December 5, 2021, after the conclusion of the first meeting in Ahmedabad.

The statement said, “The epicentre of education, training and socio-economic development of the Muslim community is the Masjid. In the time of the beloved Prophet (peace and blessings of Allah be upon him) himself, Masjid was the centre of all reforms, revolutions, unity, collectivism, including world view and worldly matters. Therefore, it can be said without doubt that the greatest revolution in human history came through the Masjid.”

It further added, “In the changing circumstances and deteriorating situation, it has become all the more necessary for Muslims to revive the centrality and true character of the Masjid, by carrying out activities about education, training, reform, guidance, unity and solidarity, charitable activities, and projects related to economic development along with worship and devotional activities. This is both a necessity and the Sunnah of the Prophet (peace and blessings of Allah be upon him).”

The All India Muslim Development Council (Masjid One Movement) is a representative umbrella body of all Muslim organizations and various schools of thought. It aims to develop and combat backwardness in the Muslim community.