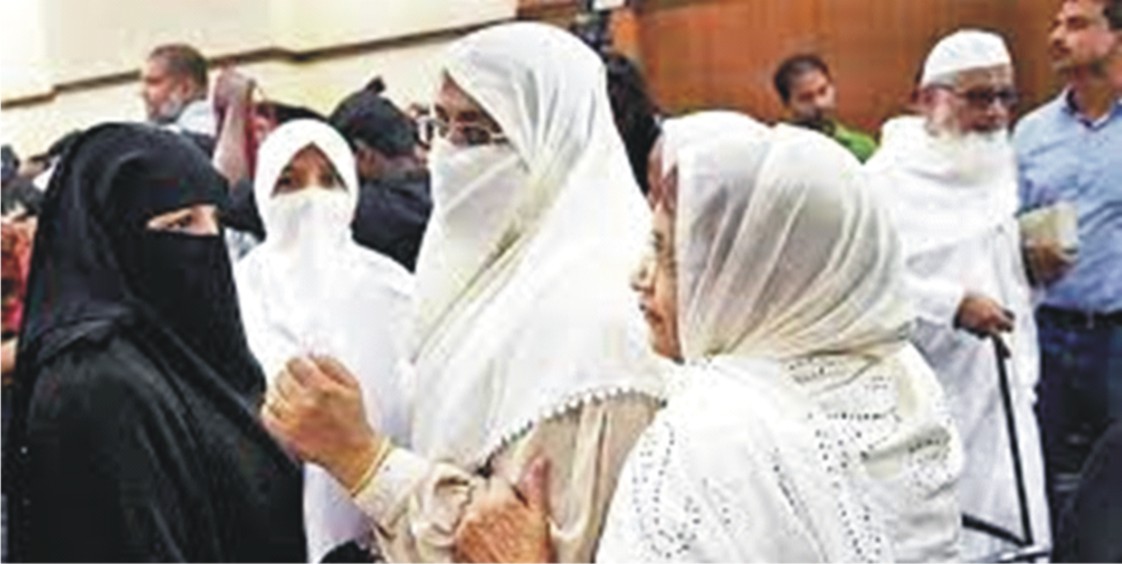 New Delhi: The decision by the All India Muslim Personal Law Board (AIMPLB) to suspend its women’s wing has created confusion and uproar in the community while social media was buzzing with reports of “disbanding” the women’s wing which came into existence in 2015.

The bad press has forced the Board to issue a public statement clarifying that there was a misconception in some circles that it had done away with the women’s wing. The statement said the news about abolishing the wing is completely untrue and unfounded. But, the clarification did not cut much ice as the board faced criticism from many quarters for allegedly “clipping the wings of the women members who were vocal and assertive”.

AIMPLB general secretary Maulana Khalid Saifullah Rahmani notified Dr. Asma Zehra, the head of the women’s wing, in a letter that the wing had been suspended and that the women were not allowed to host any events under the wing’s name. Additionally, Dr. Zehra was tasked by Rahmani to close all social media accounts used by the wing’s members. The letter stated that it will be suspended “until guidelines are developed.”

It is recalled that on the advice of the board’s then-general secretary (late) Maulana Wali Rahman the women’s wing was constituted in 2015 to promote women’s involvement in the Board’s activities and raise awareness about Shariah and Islamic teaching in the womenfolk.

After receiving the letter, women wing chairperson Dr. Asma Zehra went to social media. She insisted that the women’s department be abolished and not suspended.

In his clarification, Maulana Saifullah Rahmani said it was wrong to say the wing was abolished.
“The truth is that by including more women in the board’s various departments, the representation of women members has increased; however, because the women’s department is currently undergoing the development of new rules and regulations, the activities of the women’s wing have been temporarily put on hold. Yes, this department’s operations will begin very soon.”

Some board members, particularly senior working committee members, have described the AIMPLB decision as “arbitrary and unilateral.” Only five women make up the working committee’s 51 members, making the board heavily male and maulvi dominated.

Speaking with Islamic Voice, Dr. Asma Zehra said she was not given a chance to explain herself.

“We were not allowed to defend ourselves. These guidelines need to have been made available if the board expects us to follow them. We were told to stop conducting events and delete any social media accounts we had created while the pandemic was going on. This has really damaged us,” said Dr. Asma Zehra, a Hyderabad-based physician who runs a hospital.

In addition to Tarbiyat and the protection of our daughters, we had been attempting to campaign for social reform. If this is a targeted attack, shame on the perpetrators, said Dr. Asma Zehra.

A source in the Board told Islamic Voice that the Women’s wing was running a parallel organization and asked how a subsidiary organization can take the independent mantle from the parent organization.

In response to this, Dr. Asma Zehra quipped that we the Women Members ask the Concern Caring Senior Ulemas, Men and Women to kindly visit the Women’s Wing’s Twitter, Facebook, Instagram, and YouTube channels in response to Janab Qasim Rasool Lyas’ press release on behalf of the All India Muslim Personal Law Board.

On the advice of a four-member inquiry committee established in March 2022, the board suspended the wing and it was informed Dr. Asma Zehra on October 11 through a letter.

However, it was reported on numerous Muslim social media sites that the board had “dissolved” the women’s wing. “The wing has merely been suspended; it has not been dissolved. By providing them a presence on several committees, the board has empowered women, according to Dr. Qasim Rasool Ilyas, a member of the board’s Executive Committee and the chairman of the committee that proposed suspending the wing.

Tahniyat Ather, a Board member from Hyderabad, claimed in an open letter that the wing’s dissolution was the result of the men being unhappy with its growth in popularity and that the dissolution will be remembered as the Board’s “Black Day.” “We were not informed of the decision, and we are unaware of what transpired. We were working actively and are startled by the choice. At this time, I won’t be able to say anything more,” Ather remarked.

Dr. Ilyas responded that there had been numerous complaints and reservations about wing members going above and beyond their call of responsibility when questioned about the decision. “They had started initiatives like teaching women how to sew, tailor, and stitch. Students were receiving scholarships from them. These operations are outside the scope of the board, he said.

Dr. Asma believed that AIMPLB should take active measures in defending the issues of Muslim girl students since the issue of Udupi girls experiencing prejudice in PUC College due to wearing a headscarf. Another states in her letter, “She had regularly written letters to the Senior Members and Responsible Persons either to do it themselves or to allow her to take a major position in the hijab matter. Dr. Zehra thought that the Board was not doing enough and that the issue could not be resolved by representation alone, according to Ather’s comments in the letter. “Active efforts must be made to convey the importance of education for girls. You shouldn’t use the situation to your electoral advantage. The silence of AIMPLB could cause more issues for Muslim girls.

Mumbai-based Director of Markazul Maarif Maulana Burhanuddin Qasmi expressed shock over the quick move and noted that the wing had performed “amazing” work, particularly during mobilization against CAA-NRC. “They brought lakhs of women onto the streets by using the services of the women’s wing. And today, a handful of independent choices made are referred to as sins.

Meanwhile, according to Maulana Rahmani, the board secretaries and a few board members met to discuss this issue on October 22. Dr. Asma Zehra (Hyderabad) and Ms. Atiya Siddiqa (Delhi) also participated. All the gentlemen agreed that the women’s department (also known as the “Women’s Wing”) is crucial. It emphasizes that strength lies in unity and refutes those who suggested that the women’s wing was dissolved.