Dr. Frank F. Islam: A Profile – From a Dusty Village to the Bank of Potomac 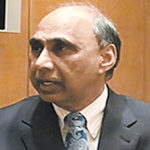 Philanthropist Dr. Frank F. Islam, who was born in a dusty village in Azamgarh in Uttar Pradesh in 1953, represents a rare success story. He studied at the Aligarh Muslim University and later took an M.Sc in Computer Science from the University of Colorado in Boulder, USA. He was taken by Prof. Wolfgang Thorn, who was visiting Aligarh Muslim University when he was a boy of just 15. Islam does not know as to why he (Prof. Thorn) chose him as there were smarter students than him. He joined the Thorn family in Boulder. He worked for a couple of companies and later bought a struggling IT company by mortgaging his house in 1994. He was the sole employee of the company. But he turned it around with hard work and consistency. When he sold his company in 2007, it had more than a thousand employees and fetched him $ 300 million. The buyer was Ross Perot who ran for Presidency of the United States. He created a Foundation for charitable work out of the proceeds.
Dr. Islam was named the Ernst and Young Entrepreneur of the year in 1997. He married Debbie Driesman, four years younger to himself and a computer science graduate. He now runs an investment company and he and his wife contribute to many charities. He has also founded a charity in the name of his benefactor Prof. Thron whom he never asked as to why he chose him at Aligarh. He was a fundraiser for President Obama’s presidential campaign. He is currently on several boards and committee and institutes in the US.