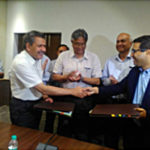 New Delhi: Jamia Millia Islamia will have a large rooftop solar plant. It signed an MoU with Sunsource, a company approved by the Solar Energy Corporation of India (SECI), on March 28. As per the MoU, the NOIDA-based company will execute the project on turnkey basis and maintain it for the next 25 years under the Renewable Energy Service Company (RESCO) model and will supply electricity at the rate of Rs. 3.39 per unit for a period of 25 years. The company will install a more than 2.50 MW solar photo voltaic system on the RESCO Model at zero cost to the university.
The MoU was signed  by Registrar, JMI Mr. A. P. Siddiqui and CEO, SunSource Energy Pvt Ltd., Mr. Kushangra Nandan in the presence of Vice Chancellor, Prof Talat Ahmad, Pro Vice-
Chancellor, Prof Shahid Ashraf, Finance Officer, Mr. Sanjay Kumar, Superintending Engineer JMI, Mr Zafar Alam, Executive Engineer, Mr. Liyaqat Ali Zaidi, other officials of the Building and Construction Department of the university and representatives of the company.
The installation of solar panels on the rooftops of various buildings like hostels, central library, schools of Jamia, Engineering faculty and Mass Communication Research Centre will start shortly.   Calling it an important initiative by the university, the Vice Chancellor Prof. Ahmad said that the idea of using solar energy was mooted about two years back.
Prof. Ahmad said that the step will result in saving on its power bill, but also save the environment and reduce the carbon footprint. He hoped that JMI will become a model for other institutions in the implementation of unconventional energy resources.
Mr. Nandan said that the idea behind installing photo voltaic system in JMI was not just to generate solar energy, but also create awareness about it. He said that his company will involve B. Tech and B. Voc (Solar Energy) course students of JMI at the time of installation of the system to provide them practical training. He also said that the company might consider providing jobs to JMI students in future.
The MoU is in line with the Central government’s target of installation of 40 GWp (gigawatt power) grid connected solar rooftop systems in the country by 2022.