Jamal Mohamed College, Tiruchirappalli has tapped its alumni for resource mobilization for various development activities and stipends for students. 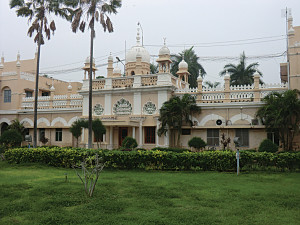 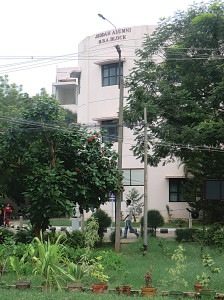 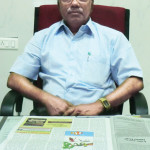 Childhood friends and the college that gave one his or her principal degree linger into one’s memory for long. People yearn to hug those pals from the primary school as much as they would like to return to their alma mater to refresh their memories.
Colleges, institutes and universities set a lot of store with their alumni these days. Past students who have made it big in business, jobs and professions could be tapped for giving back to the community more than what they have earned from its institutions. Jamal Mohamed College in Tiruchirappalli, (Tamil Nadu) a 65-year old institution with over 12,000 students on its current rolls, has organized its alumni into one such useful resource.

A thousand active alumni
Though thousands of students who have passed out of the hallowed portals of Jamal Mohamed College are contributing to the society in a wide variety of countries, the College has nearly one thousand active alumni who keep steady contact with their former College. According to Dr. S. Ismail Mohideen, Head of the Department of Mathematics and the Secretary of the Jamal Mohamed College Alumni Association, these alumni keep active touch with the College administration. The College celebrates the Alumni Day on August 15 every year. Ismail says, on an average five hundred of these alumni turn up every year. Fifteen to twenty of them are conferred Distinguished Alumni Awards each year.

Trajectory of Progress
Jamal Mohamed College was established in 1951 by two businessmen friends namely N. M. Khajamian Rowther and M. Jamal Mohamed Sahib. They were leading tanners of East India skins and ran successful export business. The lush green campus of the Jamal Mohamed College sprawls over 100 acres of land which was donated by the founding families. Today, Jamal Mohamed College offers 24 post-graduate courses, 19 under-graduate courses and 15 M. Phill and 12 Ph. D programmes under both UGC-aided and self-financing schemes. Currently, over 7,300 boys and around 4,300 girls are enrolled in the College. It runs in two shifts, up to 1-30 pm for boys and for girls from then on. The College is going for the third round of accreditation by the National Association of Accreditation (NAAC) next year. In the last reaccreditation round, the college scored 3.6 of the total four points. Principal Dr. S. Mohammad Salique told the Islamic Voice, Jamal Mohamed College has been identified one among the 45 colleges in India which can opt for awarding their own degrees and diplomas by the Union Ministry of Human Resource Development. So far 400 students from the College have been awarded Ph.Ds.
Secretary and Correspondent of the College, Dr. A. K. Khaja Nazeemudeen, who is grandson of founder Khajamian Rowther, says, the College has consistently upgraded itself both in terms of facilities and quality of academics and at one stage mooted starting an engineering college. However, the proposal has been kept in abeyance.
The College administration started realizing the potential of their alumni settled or working overseas around the turn of the century. Though an alumni association was formed as early as 1963, it lay dormant for several decades. Several of the alumni were found working in Singapore, Malaysia, the United States, Bahrain, Kuwait, Saudi Arabia, Qatar, Oman and the United Arab Emirates among the overseas destinations and in Chennai, Kerala, Bengaluru, and several other cities of India. Following the success of August 15event in Trichy, the Alumni Association in Chennai also started a chapter there which holds a dinner on October 2 every year.
Alumni Contributed Rs. 52 lakh
Last year the alumni of the College donated Rs. 52 lakh which has been utilized for extending stipends and scholarships to 778 students. The alumni funds were routed through 115 different foundations, endowments, scholarship funds, trusts and societies. Curiously, one of the college alumni Col. Govindasamy from Chennai, donated 4,000 sq. feet of prime land in Chennai to the Jamal Mohamed College last year. Col. Swamy had studied Intermediate at the Jamal Mohamed College in 1953 and remained a bachelor all along. According to Prof. A. Mohamed Ibrahim, Head of the Department of English, the plot of land carries a value of Rs. 3 crore now. Besides, several other alumni such as Ahmed Hussain who runs a roaring textile business in Trichy and Riaz Majeed, who has an oil refinery in the town, disburse scholarships from their own personal funds.
The College’s alumni include several prominent figures in public life in India and abroad. Prof. Abdur Rahman, who represented Vellore constituency in Lok Sabha and contested on a DMK ticket is one among them. Jaffer Sait, IPS currently DIG at Ramnad, noted environmentalist Prof. Shahul Hameed, who retired from the College, are also listed among the prominent alumni. One of the college alumni Nazurullah Khan, Director, Khan Soft Est. Kuala Lumpur, launched Arabic e-learning software at the College premises on January 8 this year. The software is said to be helpful in learning Arabic through English in a short duration. The Jeddah chapter of alumni have helped construction of a block in the college premises while Singapore based alumni Auditor Dr. Mohiadeen Abdul Kader is funding construction of a floor in the office building meant for SFS education building.
Jamal Mohamed College has shown that active contact with alumni can rich dividends for the educational institutions.
For alumni related information, contact. Prof.Dr. Ismail Mohideen, Secretary, cell: 9894113582, Principal, Dr. S. Mohd. Salique, 94437-66432.