October 2022 brought accolades to a Lithuanian photographer named Eugenijus Kavaliauskas. He had won a prestigious prize at a Nikon photography competition under the “microscopic photography” category. And what was the subject of his photo? An ant. A humble ant. The microscopic image showed the face of an ant with eyes and teeth. In no time the photograph was crazily shared all across the globe. It fascinated many and shocked many. The photographer was widely recognized, but very few remembered the creator of the breath taking ant. 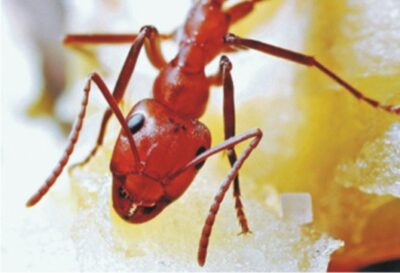 Another photo that was doing viral rounds was ‘how ants store coriander seeds. One who has some gardening knowledge will know that coriander seeds need to be whole or split in half in order to germinate. And this WhatsApp message was pointing at the intelligence given by Allah swt to the ants. The ants know the importance of cutting the coriander seed into four parts before storing it in their anthills for wintertime. If the seeds are not cut into four, they will germinate and leave the ants with no food.
After reading about the coriander seeds, one of my aunts asked me to write about these marvellous creations of Allah az wajal.
We all have had experiences where we saw an ant trail or an ant colony on a visit to a park or picnic.
Talking of experiences, I would like to share a little memoir of mine that left me mesmerized.
I had dropped an almond by mistake on the kitchen shelf which turned out to be a surprise treat for the ants. I was so fascinated by the smartness of these tiny ants, the way they suddenly appeared from nowhere, and knew exactly what they needed to do to devour the special protein bar. They bore only a tiny hole in the skin of the almond and carried parts of it from that hole. I didn’t shoo away the ants nor did I move the almond. It was a captivating scene of hard and smart labour.
I even took a quick video to capture this amazing work of nature. Later when I shared the video with my friends to highlight the amazing work of ants, it was only to get a quick tart reply ‘you seem to have too much time on your hands to stop by and record how ants eat and carry their food’.
But to me, it was time to put it to good use. It made me marvel at Allah’s design of things. How supreme is He and how perfect His planning is even for a creature as minuscule as an ant? The intelligence Allah has bestowed in all His creations, makes me a much more humble and grateful servant.
Allah swt has given these tiny creatures an uncanny ability to protect themselves and their colony. Some of us might have experienced a nasty bite from any ant. Ouch, that really hurt!! But not all ants sting. Some bite and ward off the danger, some fly, and some scurry into crevices.
When they have to cross over a big gap, Allah swt has even given them the ability to form a living bridge by clutching each other’s limbs. And they use this bridge either to help other ants cross or to carry food. Another remarkable mastery of ants is making a raft on water. They again clutch each other’s limbs and form a raft-like shape. This helps them to float on water and take their queen to safe dry ground.
Like any other creation, even in the ant species, Allah swt has created more than 12000 different types of ants. We all must have seen a few different ones around our area – the big-bellied ants, small black ants, red ants, and flying ants. But imagine more than 12000!!!
Scientists have found ants on every part of the earth except for Antarctica. Funny isn’t it, the name of the continent itself starts with Ant…, but they couldn’t find any ant there! Allah alone knows whether he has placed any ants in Antarctica or not. A human can know only what Allah wants him to know. 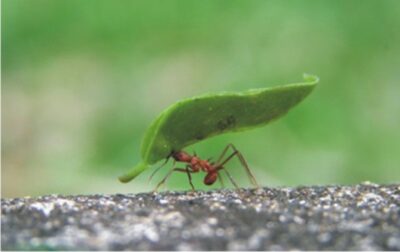 If you happen to be near nature and are good at observational skills, you might have spotted ants taking away parts of the leaves and sometimes the whole leaf on their heads. The size and weight of an ant are no match to the weight and size of a leaf. Then how are they capable of such a feat? Who has given them the strength to perform such mighty tasks?
Allah al Azim made us strong. We can lift heavy weights. A very strong man is believed to lift double his weight. But who should take the credit when a tiny 5 mm ant is capable of carrying objects approximately 30 – 40 times their own body weight!!! Is it the ant or the maker of the ant that deserves all the praise?!!
Should these signs not make us stop and ponder?
Ants are fast-moving creatures. And they work in teams. But would you believe that Allah swt did not give them the faculty of hearing and some ants can’t even see!! Then how do they perform all the tasks? Allah al Musawwir has given ants the ability to “listen” by feeling vibrations from the ground through their feet. Have you seen an ant with raised antennas? The ants send as well as receive messages using their antennae.
This reminds us of the ayah in surah a Naml where one ant warns the others
“… get into your habitations, lest Sulayman and his hosts crush you (under their foot) without knowing it.”
Scientists claim that ants do not make sounds to converse but send chemical signals called pheromones released through their body to send messages to other ants!
Allah swt gave the Sulaiman AS the power to understand the animal’s language and also the power to understand the chemical signals. What Sulaiman AS said soon after deciphering the message is a lesson for all of us.
Upon being reminded of his powers, he immediately showed his humility and said,
“My Lord, enable me to be grateful for Your favour which You have bestowed upon me and upon my parents and to do righteousness of which You approve. And admit me by Your mercy into [the ranks of] Your righteous servants.” (Al Qur’an 27:19)
He instantly acknowledged that it is only Allah swt who is the bestower of favours and is merciful.
This teaches us to be humble no matter what power we hold.
So next time you see ants, do not see them as some insignificant creatures merely mentioned in a science textbook. See them from a Muslim’s perspective and you will begin to marvel at Al Majid The All-Glorious, The Majestic, and The Ever-Illustrious who made the ants that are so disciplined, diligent, hardworking, team-focused, and goal-focused. And just like the ants He teaches every creation of His, the skills to hunt for food, work together, survives, reproduce, protect, escape, build shelter, and overall be an ayah for us humans.
They all remind us of the greatest power and to be in awe of Him – our creator.