An Uncle and the Ants

There are thousands of ants here, but you won’t find any of them squabbling or complaining. They work in perfect harmony. 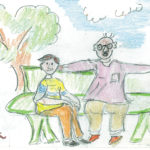 For the past few days Nola had noticed a new visitor in the park. He was a grey-haired man with a deeply-wrinkled face. He sat on a bench in a corner, all by himself. From a distance, Nola noticed him scattering something around his feet and seeming to mutter to himself. Nola was intrigued at the sight but hesitated to find out more. He was scared of adults, you see. He thought they were forever judging children and telling them what to do and not to.
But one day Nola’s curiosity overtook his fear. He walked up to the old man and asked, “Uncle, could I sit here, please?”
“Certainly, son,” the man answered, a broad smile spreading across his face.
Nola was surprised, and glad, too, at the man’s reaction.

Breaking the Ice
“Uncle, what’s it that you are always busy with when I see you here?” Nola asked, breaking the ice.
“Well, I feed sugar to the ants here, dear,” the man replied. “See, how amazing they are!” he added, pointing to a long line of ants busy picking up bits of sugar that he had spread around the bench and making their way into a patch of grass nearby.
Nola stared wonderstruck at the tiny creatures. He had never cared to observe them so closely before.
“How amazing, the way God has made them!” the man exclaimed. “The sugar they’re carting away is perhaps double their weight! There are thousands of ants here, but you won’t find any of them squabbling or complaining. They work in perfect harmony and collaboration, doing the duty that God has assigned them”collecting food, which they’ll share together. It’s all such a miracle, isn’t it?”
“It certainly seems so!” Nola heartily agreed.
“Uncle, I’ve never seen anyone feeding ants like this before. What makes you do this?” Nola asked.
No Peace and Joy
“Well, it’s quite a story. Are you sure you’d like to listen to it?” the man responded.
“Yes, yes, definitely,” said Nola.
“Well, it’s like this,” the man began. “I was a very rich businessman. I had a big house, a wife and a son. I had all the physical comforts you could think of. But there was no peace and joy at home. My wife and I were always fighting. One day, things got so bad that she announced that she was leaving me. She took our son with her, and I had to give them my house and more than half my savings.” “Oh my!” Nola interrupted.

A Real Riches-to-Rags Tale
“But that isn’t the end of the story,” the man continued. “Shortly afterwards, my business flopped and I had virtually no money left. From a millionaire, in just a few months’ time I became a pauper! Would you believe it? A real riches-to-rags tale!”
“At this time, some kind soul learnt about my story and admitted me to the charitable home for the aged poor just down the lane from here. You know the place, don’t you?” “Yes, yes, I’ve been there,” said Nola.
“Well, that’s where I live now,” the man went on. “After I got there, I was gradually led to realise that all the losses I had suffered were actually a result of my own misdoings. I was so busy making money that I didn’t give my wife and child the love and attention they needed. I also cheated many customers and entered into what they call ‘shady deals’. That’s how I made most of my wealth, you see.” “Oh dear! That’s bad!” Nola remarked.
“Bad? It’s awful! I was rightly punished by and for my own misdeeds,” the man continued. “And there’s another thing. I did no charity at all, so self-centred was I. In all those many years perhaps just half a dozen times did I give any money to the poor”and it wasn’t any big sum or for any noble reason. All I shelled out were a few coins, or a rupee at the most, to a beggar, and not because I wanted to, but just to shoo him or her away.”
“Really terrible of you, Uncle!” Nola remarked.
“Totally disgusting!” the man agreed. “And the worst thing of all was that not once in all those many years did I ever think of God. In fact, the word ‘God’ was never uttered once in our home! What could be worse than never thinking of the One who had brought me into this world and had blessed me so abundantly?”
The man fell silent for a while as he wiped his tear-filled eyes. “Anyway, now, to cut a long story short,” he resumed, “all that I was made to go through led me to realise how far astray I had gone and that I needed to make major amends before it was too late. I’m eighty-four you see, and I don’t suppose I have too long more here on Earth before I return to the Lord.”
“Hmmm…Eighty-four is quite an age,” Nola agreed. “And yes, we all have to return to Him, some day or the other.”
“So, to repent for all the many wrongs I’ve done over many years I now try to do as much good to others as I can in whatever time I have left here,” the man explained. “I don’t have much money with me, and all I can afford is a couple of rupees of sugar a week, which I share with the ants here. That’s my way of serving God, through serving His creatures.”
“Oh, so that’s what you do here every day!” Nola replied.
“Really very nice of you!”
“You might have noticed me chatting away while I’m feeding the ants,” the man continued. “Yes! Uncle, please don’t mind my saying so but I thought maybe that you were senile or something, taking with yourself like that!”
“Haha! That’s a good one! I haven’t quite lost my mind, thankfully! When you see me talking while I sit here, I’m chatting with God or with the ants, and either way it’s a great joy! I even sing to them,” the man explained. “You can join me sometime if you like!” he offered.
“Really? It sounds great fun!” Nola exclaimed. “Maybe I’ll come once in a while, along with some sugar, and we can feed the ants and sing to them and chat together with God!”