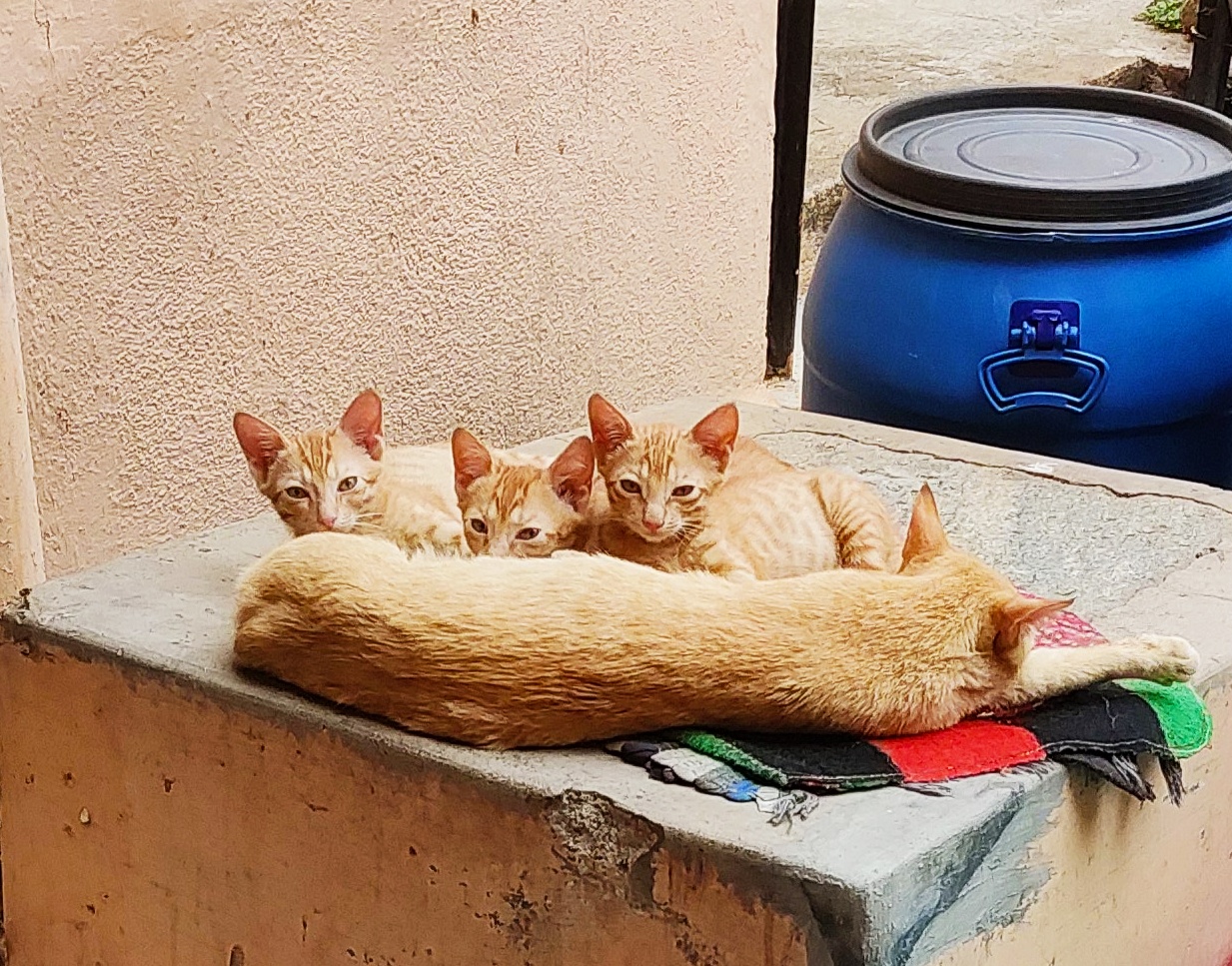 Animals and birds, as well as other sentient beings, share this planet that human beings also inhabit. As among humans, there are great mothers among animals and birds too. I’ve been lucky to meet two super mother cats Clio and Tracy and I would like to commemorate them on the occasion of Mother’s Day (May 9) for being great mothers.
Clio is a very beautiful cat. She has emerald green eyes and a very bushy tail. She’s a neat, tidy and very well disciplined girl.
Clio became a mother during a very difficult time. This was last year, when much of the world was under lockdown on account of COVID-19. She arrived at the house I was then staying at one morning. Carrying a newly-delivered baby in her mouth, she crashed against the mesh of the bedroom window, desperately wanting to enter. We were confused as to what to do. Allowing her inside might mean that she would give birth to a litter of kittens there, and that would make things very difficult for us.
God decided that Clio should come inside. We opened the door and let her in. She rushed behind the refrigerator, and, without any fuss, gave birth to four more babies right there! I had never seen anything like that before!
Clio licked every kitten super clean as they emerged into the world. She stayed calm and quiet, and so did her brand new babies, who turned out to be really ‘cool kids’, born behind the refrigerator!
The world outside was full of dangers for them street dogs, vehicles and maybe not-so-friendly or cat-loving neighbours. So, Clio and her babies were shifted to our home-help Mary’s house. Mary welcomed them without even a murmur or a question, even though she has a very modestly-sized home.
Clio seemed surrendered to God as she sat with her babies in the big cage that had been procured to transport them to Mary’s place. As the world of human beings lay under the grip of fear and uncertainty during the lockdown, here was Clio, the brave and loving new mother with her children, the cool mummy cat and her cool kids, calmly accepting what God had decided for them. Clio’s fortitude has a great lesson for us humans for how to live with hope and in surrender to the Divine Will even when faced with great challenges.
Not only did Clio turn out to be a very good and caring mother to her children, she graciously (and very spontaneously) adopted Jerry, a jolly, happy-go-lucky kitten who turned up one day some time later. Jerry seemed like a lost child, and maybe all she wanted was a cozy corner to curl up in. And so, Jerry was shifted to Mary’s house, where Clio became something like a foster mother to her.
Tracy is a cat who pops in quite regularly at the backyard of my late parents’ house. Recently, she became a mother. Tracy seems to dote on her children Tinkle, Tommy and Tickle who look like miniature tiger cubs! She allows them to have great fun in the backyard, playing games like ‘Tumble the Bucket’, ‘Drop the Stick’ and ‘Drag and Hide the Slipper’.
Tracy is a very protective mother. Recently, I heard, she gave a smack to Tabby, a tom cat who tried to get friendly with her children. She’s very careful that the babies get their food, and waits patiently for them to join her when the supper kibbles are laid out for them.
Clio and Tracy, super cat mothers, thank you for your inspiring presence in my life! There’s so much we can learn from you both!