Dolphins Call Each Other By Name 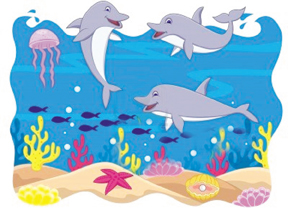 Recently, scientists from St. Andrews University were studying bottlenose dolphins off of the east coast of Scotland when they found that the mammals used signature high-pitched sounds and noises to attract the attention of other dolphins nearby. Using plenty of research as a backdrop, the scientists soon determined that the noises they were hearing were actually dolphins calling to one another by name.
Scientists have known for a while that dolphins are capable of making tons of different sounds in order to communicate. In the past, humans have observed dolphins making noises to attract other dolphins to a food source. However, the name noises are a signature capability, one that biologist Vincent Janik tells is important because it means dolphins can not only copy sounds, they can also relate a specific sound back to a specific member of a dolphin community.
During the course of the St. Andrews University observation period, the scientists looked at a community of 150-180 dolphins. Initially, the objective was to observe and record as many whistles as possible. Once the whistles were captured on tape, the scientists would play them back for smaller groups of dolphins. During the tenure of the study, the scientists found that dolphins would respond and even sometimes approach the humans when their individual whistle was played.
The interesting thing about these is that they are not voice recognition. In humans you can have different people say the same word and you will still be able to tell who’s speaking. What we also do is have names, so they are very different call types. The dolphins do the same thing; they’ are developing a completely new call type, a melody or whistle, which is not dependent on their voice features.