Islamic Voice 0 January, 2018 12:00 am
Myanmar’s Muslim Free Hospital: A Boon to the Poor
Japan Welcomes Muslim Travelers
“Who *Pushed* Me”

We rode a rickety cycle rickshaw to go around Chandini Chowk to have the real feel of the old world transport and chomped on famous jilebi and rabdi at an eatery. 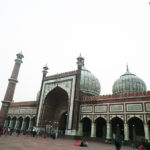 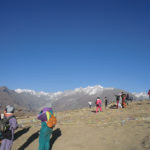 It was my maiden flight journey that took me to Delhi from Bengaluru on November 4 morning as part of the holiday trip from our college.  If the plane was cruising through or above clouds all along, in Delhi, toxic smog awaited us. The bus from the Delhi international airport took us”over 140 girls”to our place of stay, Hotel Singh Sons in Karol Bagh.
The tour organizers had allowed us a free choice for the first day. We, four girls, chose to visit the hoary 17th century Jama Masjid built by emperor Shah Jahan and roam through parts of ever-crowded Old Delhi. The flight of stairs delivered us onto the huge portals of the mosque built in red sandstone. Though we have been seeing on TV the huge hulk of the mosque in the foreground each time the Prime Minister spoke from the ramparts of the historic Lal Qila, we could realize only now that the two structures were far apart. The structure was simply awe-striking and magnificent.
We rode a rickety cycle rickshaw to go around Chandini Chowk to have the real feel of the old world transport and chomped on famous jilebi and rabdi at an eatery in its labyrinthine streets. Our next port of call was famed Kareem Hotel that offered us juicy seekh kababs.
Next morning ushered us at No. 1. Safdar Jung Road, the residence of martyred prime minister Indira Gandhi. The house provided us an insight into the great Nehru-Gandhi family that shaped India’s destiny in the initial years after the Independence. On our way to Qutb Minar in Mehrauli on the western fringes of the capital, we stopped at the majestic India Gate that stands on the Kingsway, rechristened Raj Path. The grandiose Rashtrapathi Bhavan lies at the far end of the Raj Path. The entire landscape filled us with awe.
Qutb Minar too is an impressive structure with 397 steps of its spiral staircase leading to its 73-metre high pinnacle. An overnight bus journey took us to Rohtang Pass, on a three-hour drive from Manali in Himachal Pradesh. As the sun rose over the snow-capped mountains, the scenery was jaw-dropping. As the bus climbed up and up, we got into additional layers of warm clothes. Each milestone crossed had bucketloads of scenery. Thrill of being amidst mountains that we had merely seen in photographs was beyond description. We could warm ourselves with hot noodles and garam chai along the highway on the wayside stalls.
The next day took us to Hadimba Devi temple enclosed inside an ancient cave surrounded by bazaars where local tribals sold woolen mufflers, sweaters and caps. On the way back to the hotel, we picked up a few green apples for the journey to Shimla. A gurgling river kept company with us on the 8-hour drive through the winding highway over the mountains. Our place of stay was East Bourne Hotel. The windows offered a spectacular view of the entire Shimla town which used to be sheathed in fog during the mornings. Next day, a stroll through the Mall Road on the Ridge delivered us the piece de resistance of the entire trip.
On the morning of 8th day of our trip, we left for Delhi via Chandigarh, the only planned city of India. A visit to the Rock Garden provided us ample insight into the mind of the legendary artist-landscape architect Nek Chand who fashioned the entire garden with discarded material. The bus brought us to Delhi and the next evening we took Rajdhani Express from Hazrat Nizamuddin to return to our homes in Bengaluru 33 hours later.
(The writer Kaunain Seher is a BA Final student in Bengaluru).