How to Win Wars and Influence Enemies 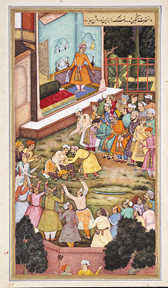 The great Mughal Emperor Akbar was busy building his empire across the length and breadth of India. His armies had attacked the Pathan stronghold at Bengal and captured its king. The fiercely independent Pathans unfurled the banner of revolt in a short time under the leadership of Isa Khan who challenged the Mughal army for a fight.
Akbar sent Shahbaz Khan one of his ablest generals and Isa Khan lost no time in driving his forces out of Bengal putting his entire army to rout.
Man Singh, a Rajput, was the bravest of all generals to serve under Akbar. The emperor summoned him and tasked him with the job of bringing Isa Khan and his army to heel.
The Mughal army marched under Man Singh and reached the banks of Brahmaputra River, where the two armies clashed again. During the course of the battle Man Singh’s son-in-law was killed. The news of his death made Man Singh furious and he marched to the head of the army and challenged Isa khan to a personal duel.
Isa Khan was not slow in accepting the challenge. The two warriors advanced towards and started to fight furiously, while the armies on both sides watched in silence waiting for the result of the battle, which would decide the course of the battle.
The warriors fought long and hard. Both of them were renowned for their bravery in the battlefield. While the fight was going on Man Singh’s sword suddenly gave way to a clever artifice in employed swordsmanship by Isa Khan to disarm his enemy. The sword of Man Singh was cut into pieces. Man Singh was now unarmed completely at the mercy of Isa Khan.
At this point in time, Isa Khan advanced towards Man Singh and offered him his sword, which left the brave general speechless. At length, he gathered his wits and asked Isa Khan: “But, what about you?”
Isa Khan replied: “I have a spare sword with me to fight you.” Taken aback by his etiquette in warfare, Man Singh stood still for a few seconds thinking hard. Finally, he threw away the sword offered by Isa Khan and advanced with open arms towards him.
His adversary walked forward and the two gallant soldiers met in a warm embrace in the battlefield. The fate of the Bengal Province was decided by this grand gesture. It would remain an independent sovereign territory, as an important ally of the Mughal Empire.
Adapted – The Romance of an Eastern Capital, Bradley-Birt, Francis Bradley (1874-1963)
MORAL OF THE STORY: If wishes were horses, and dreams were to come true, then I would wish that all conflicts in the world, across all geographical, political, moral, ethical divides should be fought on the same lines as in the story above and the age of chivalry that was declared long dead should be revived again both in its letter and spirit and people of the world settle their differences on the lines of the story written above.