Ahusha’s rapidly deteriorating condition did not dampen her passion for wild animals. 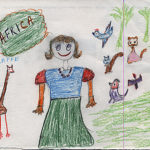 Ahusha was just five when she decided what she wanted to do when she grew up. She wanted to live in Africa and travel about there, exploring the amazing wildlife of that vast and beautiful continent!
Ahusha’s passion for Africa began when she saw a fascinating film about African birds. After that, there was no looking back. In her spare time, she’d watch videos about African animals and read whatever books she could get hold of about the subject.
Africa! That very word conjured up in little Ahusha’s mind endless rolling plains, teeming with zebras and lions, elephants and bison; strange-looking trees and tall, densely-forested mountains; massive rivers that one could cross only on flimsy wooden canoes, and colourful people who lived in harmony with nature and the wilderness. It seemed a completely different world altogether from the crowded and filthy city in which she lived!

Books About Africa
Ahusha’s parents encouraged her in her dreams. They bought her books about Africa and helped her access films about the continent on the Internet. Her mother explained to her that if she trained to become an animal doctor she might be able to go to Africa and work in a wildlife park there. Ahusha  was so excited at the thought! She decided then that she would like to train as a vet.

Serious Illness
But when Ahusha turned nine, her world came tumbling down. She hadn’t been keeping well for a while, and so her parents took her to a hospital. When the doctors examined her, they discovered that she was suffering from a very serious illness. You can imagine what a shock this was for Ahusha and her parents!
Soon, the disease began to rapidly spread and Ahusha had to stop going to school. She thought she wouldn’t ever be able to train as an animal doctor and go to Africa and live among the wild animals there.
But her rapidly deteriorating condition did not dampen Ahusha’s passion for wild animals. Sitting at home, she soon discovered that there were  many different species of birds, insects and animals that lived in and around her house, right in the middle of a huge and crowded city, that were just as fascinating as the African animals that she so loved! Her own home, she was delighted to discover, was like an African wildlife park!
There was, for instance, the pack of pigeons who’d arrive early in the morning to peck at the grains that Ahusha would set out for them. Ahusha loved the ‘kuttur-kuttur’ sound they made as they busily went about their work. Then, there were beautiful green parrots with cheery-red beaks that visited occasionally. There were also mynahs and eagles, kites and woodpeckers, weaverbirds and sparrows. Sometimes, a hoopoe would drop by. A family of bats flew about at night, and once Ahusha even spotted a large barn owl, sitting all by itself on a tree outside her bedroom window!
There were also many different types of beautiful insects in and around her home, Ahusha now noticed: long-legged spiders, who worked hard weaving intricate webs and patiently sat in them waiting for their prey to come by; butterflies in different hues and sizes, and dragonflies that whizzed around like helicopters; bees, wasps and glowworms and different types of flies; earthworms, centipedes and hairy-legged caterpillars.  And so on.
Although of course there weren’t any big animals around Ahusha’s house as in Africa, there were species that were every bit as interesting: for instance, the family of squirrels that lived in the  majestic  peepal tree nearby. Ahusha thoroughly enjoyed observing their antics as they raced up and down the tree chasing each other, merrily shrieking away at the top of their voices! There were hairy bandicoots that would create a ruckus at night as they set about gobbling the food that Ahusha had laid out for the cats that roamed about the neighbourhood. Sometimes, a black-faced, long-tailed langoor would naughtily peep into Ahusha’s bedroom, and every now and then a family of monkeys would arrive and grab a bunch of bananas from the kitchen, much to Ahusha’s delight! And there was also Tonku, the little tortoise that Ahusha’s mother had given her as a gift, whose ever-so slow way of doing things Ahusha thought was simply wonderful and that it was something that human beings could greatly profit from!

Unique and Fascinating
Ahusha spent much of her day carefully observing the amazing wildlife all around her which she had never earlier given much notice to. She could spend hours doing that”it gave her such joy! She discovered that each animal, bird and insect that she spotted was very beautiful. Even a mosquito or ant was as unique and fascinating as, say, an African gorilla or rhino!
Ahusha no longer felt sad that she might not be able to go to Africa. Her dream of living among wild animals had come true in a different way!
It took her some years, but slowly and steadily, Ahusha began to recover”contrary to what the doctors had expected. All this while she had been confined to her home. It certainly hadn’t been easy for her, but her father said that it was in part the joy that she got from watching the wildlife around her that helped her get well.
Ahusha is now back in the pink of health. She didn’t manage to complete school”which means that she can’t train to become an animal doctor. But still she is confident that God will arrange for her to travel to Africa very soon, where she could still live and work among the animals there!