Little Tinky and Her Kitty Friend 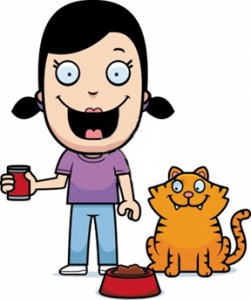 Every morning without fail”at exactly five o’clock”Tinky would be woken up by the familiar cry of a cat squatting on her window-sill. She would peep out of her blanket and wave out to the furry orange-coloured ball that looked back at her with its friendly, peppermint green eyes, which were round like marbles. Tinky could even spy a naughty smile spread across the cat’s face. What joy that sight gave her! How wonderful it is to see your best friend the first thing in the morning”and Kitty was Tinky’s closest companion. She loved playing with Kitty and taking care of her.
“Kitty, Kitty! I come with keem!” Tinky would chirp as she would throw off her blanket, jump out of her bed and rush to the kitchen. “Mumma! Mumma! Kitty keem time! Open door”, she would call out, loud enough to wake the whole house up.
“Hell! It’s that wretched cat again,” Tinky’s father would snarl, being rudely woken up. “The damn thing won’t let us get a single night of decent sleep.”
“Tinky! How many times have I told you NOT to talk to that cat?” Tinky’s mother would fume as she would follow Tinky into the kitchen. “We can’t afford to feed Kitty every day, you know. I’m tired of telling you that cream is really very expensive, and it certainly isn’t for street animals. And it’s cream, by the way, not keem”when are you going to learn to pronounce the word sensibly? You ought to by now, you are a big girl. You HAVE to put an end to this silly habit of yours.”
But before Tinky’s mother could stop her, Tinky would have already opened the fridge, taken out the milk-jug, and, with a giant spoon, scooped up all the cream floating on the top, carefully transferring it into Kitty’s strawberry pink plastic bowl.
“Peeze open door Mumma,” Tinky would say, lifting the bowl in her little hands. At this sight, Tinky’s mother’s heart would melt and she would let Tinky out to feed play with Kitty.
Tinky’s father wasn’t at all pleased with Kitty. “That silly cat has to be taught a lesson,” he told his wife one day. “I just won’t have it spoiling my sleep any more, and Tinky should know that I won’t have her waste my hard-earned money on it.”
Tinky’s mother tried to reason with him””Tinky really loves the cat, and what’s a bit of cream? It isn’t a major dent on our pocket,” she replied, but he refused to listen.
And do you know what Tinky’s father did later that day? He put an enormous lock on the refrigerator and kept the key himself, so that when Tinky woke up the next morning and bounded to the kitchen to fill Kitty’s bowl with cream, she got the shock of her life. She tugged at the handle on the refrigerator door as hard as she could, but it simply wouldn’t budge.
“Ha! Ha!” laughed Tinky’s father, who drew up to her and dangled the key to the lock in front of her. “I’ve got the key, and I am NOT going to open to fridge. Let your silly cat go hungry, I couldn’t care less. I tried to reason with you, Tinky, but you didn’t listen to me, and so I’ve had to be strict with you this time.”
Poor Tinky’s face went all purple all of a sudden, and then she burst out wailing. It was a truly heart-rending sight”that little girl in her crumpled nightdress (decorated with little angels and teddy-bears), with giant tears rolling down her cheeks. Tinky cried so loudly that she woke up the neighbours, who came rushing in to see what the matter was.
“You ought to be REALLY ashamed of yourself,” the lady who lived next door told Tinky’s father when she learned of what had happened. “I’ve never heard of a father being so very mean to his child. And to think it’s just for a little bit of cream and an hour of sleep! “
“You could be hauled up by the police and taken to court for being so cruel to poor little Tinky,” added the lady’s husband. “I have half a mind to call the police right away.”
And do you know what happened next? Tinky’s father felt so ashamed of his bad behavior that he began to cry”in front of all the neighbours who had gathered there.
“I know I’ve been terribly mean to you,” he said to Tinky when he had gathered himself, “and to your cat as well. I promise you, my dear, that I won’t ever come in between you two again.” And to make amends, he rushed into the kitchen, opened the refrigerator and filled Kitty’s bowl till the brim with frothy milk. Then, holding Tinky’s hand, he went out and gave it to Kitty!
Kitty, who, all this while was watching the goings-on in the house with great curiosity but not understanding what the great hullabaloo was all about, set down to lapping up the milk at once! And when she was over, she let out a great “MEOW”, which meant, Tinky explained, that she wanted another helping. You should have seen how excitedly Tinky’s father ran into the kitchen to fetch Kitty a bowlful more of creamy milk!
“Thank you Tinky for teaching me a wonderful lesson,” he beamed as he came back with the milk and a handful of biscuits for Kitty. “You’ve taught me what wonderful joy it is to share love with others.” Then, gently lifting Kitty into his lap, he added, “I wouldn’t trade the joy of feeding Kitty for anything else!”
“Not even for an hour more of sleep or to save money on cream?” Tinky’s mother asked playfully.
“No, dear, not even for that!” Tinky’s father replied, and the three of them burst out laughing. And, for its part, Kitty let out a naughty giggle, demanding yet another bowlful of milk!