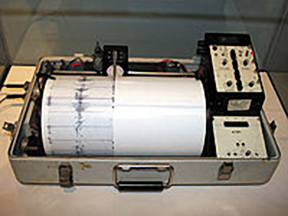 Earthquakes can be measured by the help of a seismograph. The scale used for this purpose is called Richter Scale, name after its inventor.
A seismograph is a small gadget in which a weight is suspended from above which stays at rest even when the earth trembles. A pen is attached to the pendulum and it remains in contact with rolling drum. As the tremors of the quakes reach the surface of the earth, the pen staying in touch with the drum moves to and fro and records the waves. Earthquakes of an intensity of 2.5 on the Richter Scale can be felt by the human being. Anything between 7 and 8 is a major earthquake and can prove highly disastrous.