Moin Cannot Walk, But He Swims like a Champion!

Islamic Voice 0 February, 2016 12:00 am
How do the Hot-air balloons Float?
Dunya and Akhirah
Parenthood and its challenges 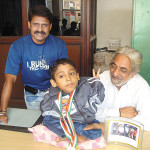 Moin Junaidi is a teenager from Belgaum, Karnataka. Unlike most other boys his age, Moin cannot walk. What he can do, however, is swim, like a champion. Moin has brittle bone disease, or osteogenesis imperfecta, which means that his bones are extremely brittle and highly prone to fracture. For Moin, even a slight bump can cause a fracture. He can neither stand upright nor hold anything in his hands. Others might let the smallest of setbacks get in the way of pursuing their goals, but Moin has not even slowed down. Despite having over 200 fractures all over his body, Moin is a champion swimmer who has made both Karnataka and India proud. He has already won medals at the National Paralympics Swimming Competition held in Kolkata, and his brand-new goal is to win the gold medal for India in the next Paralympic Games, in 2016.
“(Source:www.thebetterindia.com)