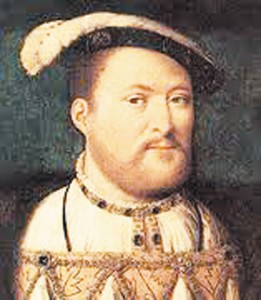 Henry VIII who ruled England between 1509 and 1547, was the most married king in the history of England. He was a brute and had six wives who suffered varied fates: Catherine of Aragon (divorced), Anne Boleyn (beheaded), Jane Seymour (died in 1537), Anne of Cleves (divorced), Catherine Howard (beheaded) and Catherine Parr, who survived him.