You can see, children, how God rewards every little good deed that we do! 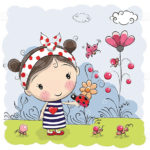 Pinku was a little girl who studied in primary school. Her school bag was almost as big as she was! She found it very difficult to carry it every day to school”which she had to”because she was quite small, even for her age.
Pinku loved drawing animals, birds and trees in her drawing book during Art class. She liked that more than all the other subjects she studied at school. She just loved anything to do with Nature.
One sunny Sunday morning, Pinku stepped out into the backyard of her home to wish “Happy morning!” to the crows, pigeons and the cats that generally came around there at that time.
Pinku had learnt a beautiful practice from her friend Trinkoo”and that was, to look down while walking so that she didn’t step on an ant or any other creaure. That morning as Pinku walked about in the backyard of her house slowly, very carefully looking down to where her feet were going, she spotted a little ant carrying in its mouth a piece of straw that was several times its size. It was making its away ahead very energetically!
Pinku was so fascinated by the sight that she bent down to watch the ant in delight. How amazing it was, she thought, that such a tiny creature was able to carry such a big thing in its little mouth! Why, she wondered? Where was the ant heading to? Where did it get the strength to carry something so much bigger than itself?
Pinku loved talking to animals, and so after a while she called out to the ant: “Hello Arnold (for that was what she named it!) A happy morning to you! And where are you going, my dear?”
Arnold, who was very busy (as you might have noticed, ants often are), seemed to look up and smile at Pinku, with (or so Pinku imagined) with a nod of his little head!
A short while later, Pinku saw that Arnold had stopped near a stone and could not go ahead because the stone was blocking its way. Pinku discovered that Arnold wanted to go inside a little tunnel-like opening near the stone but because he had that bit of straw in his mouth, he couldn’t do so. For the little ant, the little stone was like a big mountain!
Maybe the tunnel was Arnold’s home, Pinku thought. Perhaps he wanted to use the straw to make a bed for his family!
Pinku felt very sad for Arnold. She remembered how heavy her school bag was and how hard she found it to carry it on her little shoulders.
Arnold patiently waited at the entrance of the tunnel, the straw still in his mouth. Pinku felt that she had to help him.  And so, do you know what she did? She lifted the straw from Arnold’s mouth as carefully as she could and placed it near the mouth of the tunnel. Arnold then crawled into the tunnel, turned his head back, lifted the straw in his mouth and disappeared inside!
Pinku was really very happy! She imagined Arnold fast asleep, curled up snugly in his new straw bed!
At school the next day, Pinku told Mr. Pinto, the drawing teacher who was a very kind man, all about what had happened the day before. Mr. Pinto was delighted at how Pinku had helped a little ant enter his home. He told the whole class about Pinku’s good deed!
Later that day, the principal of the school, who heard the story about Pinku and Arnold from Mr. Pinto, was so moved by what Pinku had done that he called all the students and made an important announcement.
“Thanks to Pinku I now know, children, how difficult it must be for you to carry your school bags full of heavy books every day, just as it was for Arnold the ant to carry that bit of straw into his home in the tunnel.” he said. “And so, from tomorrow onwards you can leave your books at school, and all you need to bring in your bags are your snack-box and your water-bottle!”
A big ‘Hurrah!” went up from the children, who were thrilled at the wonderful news of not having to carry a heavy bag to school any longer. And you should have seen how excitedly they greeted Pinku and thanked her for what she had done!
So, now you can see, children, how God rewards every little good deed that we do!