Islamic Voice 0 July, 2013 12:00 am
What is a Maglev Train?
Tale Time – Who is more Merciful?
A Fun Invention To Lighten Our Burden on the Environment 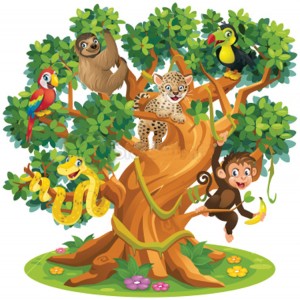 You would have thought that it was high time Poky retired and spent the rest of his years thinking about what are called the ‘higher purposes of life’. After all, he was well past sixty. He was the richest man in his village, and certainly didn’t need to keep making money. But no! The older Poky got, the greedier he became.
“You won’t take anything of what you own when you die, which probably isn’t too far off, Poky,” said his neighbours. But Poky wasn’t the sort of listen to such sensible advice. ‘Oh! Stop being mournful,” he would snap. “Life is to be enjoyed, and there’s nothing more enjoyable than making money!”
Poky lived all by himself in an enormous house, which was surrounded by a ring of trees. The trees were home to a multitude of little creatures: spiders, ants and other insects, squirrels, monkeys and birds. How happily they chirruped, squawked and shrieked, all day and night! It was like a non-stop orchestra!
But Poky didn’t like the sounds that the creatures made one bit. They drove him really crazy! This wasn’t at all surprising, for he cared just for himself, and so you could hardly expect him to appreciate the birds and the beasts that lived around him. They were a terrible nuisance, as far as he was concerned.
“I’ll teach those horrible animals a good lesson,” cursed Poky one morning as he crawled out of bed. “I couldn’t get a wink of sleep last night, with those silly owls hooting non-stop. How dare they sit on my trees and rob me of my sleep!”
And, do you know what Poky did later that day? He set about chopping every single tree that surrounded his house! As each tree came crashing down, you should have seen the malicious glee that lit up Poky’s face at the thought that the creatures who lived in ‘his’ trees would now be forced to find another home for themselves. “I’ll be able to sleep like a log now!” he beamed. The thought that he would earn a fat amount of money selling the trees he had chopped down made Poky even more pleased with himself!
That night, Poky curled up in bed all very excited. His house was enveloped in pin-drop silence. The animals that once chattered away all night had all fled, for Poky had demolished their homes earlier that day. “Ah! What bliss! At last! No silly crickets and noisy night-birds to drive me mad! Why didn’t I think of chopping down those awful trees before?” Poky said to himself as he drifted off to sleep.
But do you know what happened later that night? A band of robbers broke into Poky’s house and ran off with almost everything that it contained! Poky was lucky to be able to escape with just his night-clothes on!
What had happened was this: the band of robbers hadn’t dared go near Poky’s house all these many years, fearing that they might wake up the beasts and the birds that lived in the trees in Poky’s compound, who would make such a deafening din that Poky would be sure to be alerted to their presence and call the police at once. But earlier that day, when the robbers had spied Poky chopping down the trees they could hardly believe their ‘luck’! “This is just the day we’ve been waiting for, friends!” they said to themselves excitedly, “Those horrible creatures who lived in the trees around Poky’s house won’t be there tonight to wake him up. Let’s strike when the iron is hot. It’s now or never!”
And that is how, literally overnight, Poky had been driven, as the saying goes, ‘from riches to rags’, with not a penny in his pocket. How he rued his greed! “You’ve been mean and selfish all along, Poky,” said his neighbours, “and so you’ve been paid back in your own coin. If you hadn’t driven those poor owls and parrots and monkeys out of their homes, you wouldn’t have been driven out of yours. All these years, it was they who kept the robbers away from your home, but you didn’t think twice before driving them out of theirs. See where your ingratitude has got you! You’ve learnt a good lesson, haven’t you?”
“You’re right,” stuttered Poky shame-facedly. “I can’t say anything in my defence.”
Poky’s neighbours were kind folk, and they felt sorry for him. They provided him with food and shelter, but in return they insisted that he must work. And, do you know what his work was?  He had to go around the village, feeding nuts, grains and bread to the birds and the little animals that lived in the trees around.
In a while”you may not believe it”Poky fell madly in love with his work! “How beautiful it is to see these wonderful creatures chattering about! Caring for them gives me all the joy I want and need”much more than all the money I once had did!” he will tell you if you meet him now.