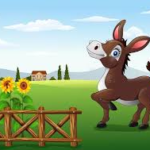 Ponytail served Rona faithfully for many years. And do you know what she got in return? Just a bit of grass and some water every day.

Ponytail was a beautiful, five-year old donkey. She worked for Rona, a washerman who lived in a small town. Her job was to carry the clothes that people would give Rona to wash. It was tough work.
Ponytail served Rona faithfully for many years. And do you know what she got in return? Just a bit of grass and some water every day. Often, Rona would scold her for being slow, and would even beat her. That’s so cruel, isn’t it?
One day, Rona thought to himself, “This useless donkey is getting old. She walks so slowly. Soon, she won’t be able to work at all. I don’t want to spend money on her food when that happens. It’s better I turn her out now.”
Shortly afterwards, Rona bought himself a motorcycle. It would be faster and easier to carry the clothes on the motorcycle than on Ponytail, he thought. He brought Ponytail out from her shed and parked the motorcycle in her place. Poking her with a stick, he pushed her out into the streets! He didn’t want to have her with him any longer.
You can imagine how sad and frightened poor Ponytail was.

Searching for Food *
Some hours later, a farmer and his wife, who were visiting the town, spotted Ponytail. She was wading through a mountain of garbage, searching for food.
The couple recognised Ponytail, because she was the only donkey in town. Thinking that she might have slipped out of Rona’s house by mistake, they went to meet Rona. They were shocked when Rona told them that he had thrown Ponytail onto the streets because she was getting old and slow and that he had a motorcycle now to take her place.
“That donkey might get hit by a car if it’s left on the streets,” the farmer said to his wife when they came out of Rona’s house. “And the poor child might have only garbage to eat,” the farmer’s wife added.
“I’ve got an idea!” the farmer suggested. “Do you think we could have it stay with us on our farm? I’m sure she’d be very happy there!”
“I was just about to suggest this to you!” the farmer’s wife exclaimed. “That would be so wonderful!”
And do you know what the farmer and his wife did? They hired a van and put Ponytail in it and took her along with them to their farm!

Love and Kindness
The farmer and his wife treated Ponytail like their own child. They fed her well and spoke to her kindly and took no work from her. They loved bathing her, brushing her fur and giving her special treats, like apples or a bundle of hay, every once in a while. And they never forgot to give her a big warm hug as soon as they saw her in the morning!
*
As they say, ‘All things happen for the best’. It certainly turned out for Ponytail’s best that Rona turned her out from his house. If it weren’t for that, she’d still be carrying those heavy loads for a man who didn’t care for her at all. And she wouldn’t have been enjoying the love and kindness of the farmer and his wife and the lovely farm where she now lived.
If Ponytail could speak, she might even have said a big ‘thank you’ to Rona while thanking the farmer and his wife and requesting God to bless them for all they had done for her.