Islamic Voice 0 September, 2013 12:00 am
Do You Know?
Frooty the Kitten’s Fruity Message!
Intoxication of Egoism 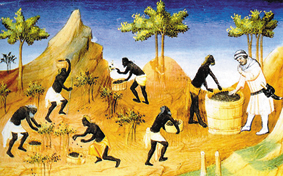 The slave trade was a three-way trade in human beings. The Europeans began to visit the African coast around mid-17th century. They would bring cloth, tools and weapons and give them to African tribal chieftains. These tribal heads would capture people from inner areas of their kingdoms and sell them as slaves. These would then be chained and taken to America to work in plantations. Hundreds of these slaves would be carried in the hold of the ships in miserable conditions with several dying during the voyage. On reaching the Americas, they would be sold to white settlers to work in farms and workshops. In turn, the plantation owners would exchange them for sugar, liquor, tobacco etc which would be brought to Europe and sold in the market. It is estimated that by the 1790s, 480,000 people were enslaved in the British colonies. They were treated very cruelly and had to put in labour beyond their capacity. By the early 19th century, voices began to be raised against slave trade and it was first banned in 1808 and phased out in 1830.