Difference between Arctic and Antarctic 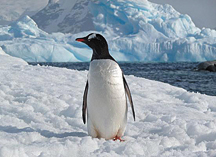 Areas around the south pole is Antarctica while the areas around the north pole is called Arctic. Both are covered by ice caps. But there is a difference. Antarctica has rocky land under the ice while it is only sea under the Arctic ice caps. Even the animal life is different. Penguins are found in their thousands in Antarctica. But they are not found in north pole. Many seabirds such as Albatross, whose wingspan is about 3.5 metres, live in islands near the south pole. The Arctic region has animals like polar bears and walrus, which are a species of seal with big tusks. However, both poles are ideal habitats for whales.