Something Beautiful for Dada!

The day Reha got to her grandfather’s place she noticed that he wasn’t quite his usual self. 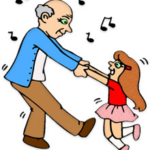 Reha was really excited”as she always was at that time of the year. She was going to her grandfather’s for the winter holidays. She just loved being with her Dada. He was so full of fun! He was the greatest teller of stories she knew, and there were few things that Reha loved more than listening to a good tale.
The day Reha got to her grandfather’s place she noticed that he wasn’t quite his usual self. He laughed and joked, but he just wasn’t like he used to be. There was definitely something wrong somewhere, little Reha knew.
That evening, after dinner, when she crept into her grandfather’s bed and cuddled up next to him, waiting for him to start telling her a tale, Reha said to him, “Dada! Is something troubling you? You aren’t like you used to be.”
Reha’s grandfather smiled but said nothing.
“Don’t hide things from me Dada,” Reha insisted. “I know I’m small, but maybe if you tell me what the matter is, I could do something about it.”
“Well, it’s like this child,” Reha’s grandfather said hesitatingly. “I’m old now, and my feet don’t carry me up the stairs. And so, I can’t now go to the place of worship that I’ve been going to every single morning for almost fifty years. If you remember, there’s a long flight of stairs leading inside and I just can’t manage to climb them any longer.”
“So, you’re sad you can’t go there now?” Reha interrupted him.
Reha’s grandfather nodded. “Yes dear, I’m very sad. Going to worship there early in the morning used to be the best thing of my day.”
“But God is everywhere, Dada,” Reha said. “That’s what Mummy says. So, maybe you can remember Him at home instead!”
“That’s very true, dear,” Reha’s grandfather replied. “God is everywhere”He’s even within you and me”and one can remember Him anywhere. At the same time, I loved sitting in that place of worship, along with many other people who were remembering God at the same time. But now my feet won’t take me there any longer.”
“If that’s what’s making you sad Dada, I think I could do something about it,” Reha announced.
“Knowing you, you just might!” Dada said light-heartedly, giving Reha a pat on her cheek.
Next morning, Reha went to meet Mr. Shan, the man who managed the place of worship that her grandfather so loved. Mr. Shan immediately recognised her”he had seen her several times there with her grandfather.
“It’s sad your Dada can’t come now. He can’t climb the stairs. I don’t think he failed to come here even once in over fifty years, but what can he do now, given the condition of his feet?” Mr. Shan said.
“I’ve got a brilliant idea, Uncle!” Reha announced (she had come well-prepared with this). “It’s very simple! Could you arrange for an elevator leading up into the worship hall? That way, Dada and other elderly people who can’t climb the stairs, and even people who are in a wheelchair because of some illness or accident, can come here.”
“An elevator is certainly a good idea, child,” Mr. Shan said. “I thought of it myself. But it costs a lot of money. Where are we going to get that from?”
“I’ve got an answer for that, too,” Reha replied. “I’ll put in all the pocket-money that I’ve saved, and I can ask some of my and relatives friends to contribute, too. I know this idea is going to work because I asked God about it last night and I felt He told me that I must go ahead with it.”
“If you feel that it is God’s plan, then you must certainly do what you think He wants you to,” Mr. Shan said, deeply touched by little Reha’s faith.
And do you know what Reha did next? She rushed back to her grandfather’s house and, borrowing his phone, sent out a message to many friends and relatives of hers. She explained how installing a simple elevator could enable her grandfather, and many people like him, to continue to visit their much-loved place of worship. She requested them to generously contribute money for the purpose.
The response to Reha’s appeal was overwhelming”Reha knew it would be because she felt that it was God’s plan, not hers. Several of her friends and cousins sent her money, and three businessmen (fathers of her friends) together contributed more than enough for a brand-new elevator!
Wasn’t that really wonderful!
Very soon, Mr. Shan managed to install an elevator in the place of worship. You can imagine how overwhelmed Reha’s grandfather was when he heard about it! Being the eldest member of the congregation, he was invited to inaugurate it. But he insisted Reha must do that, because it had been her idea. Inline images 2
Reha’s grandfather just couldn’t stop blessing Reha for what she had done. “May all the merits of my worship go to you, my dear. May all those who, like me, can’t walk up the stairs but can now come here because of the elevator, bless you!” he said to her, his face wet with tears. “Because of your efforts, I’ll be able to worship there once again!”
“And then you’ll also be back to being the same jovial Dada as before!” Reha giggled.
“Haha! And I promise I’ll tell you a good story every single day when you’re here, just as I used to all these many years!” Dada beamed.