Sparrows in the Snow – God helps people who help others. 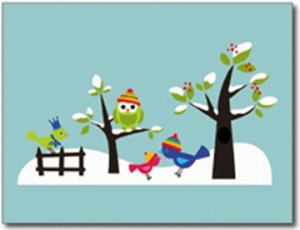 Grandpa Jigme hobbled through the dark corridors of the house as fast as he could on his one leg, shouting out orders. “Yeshe, rush up to the roof with a spade and begin shoveling the snow off. Dolma, bring in the yaks before they freeze. Thubten, start the fire in the kitchen right away or we’ll all soon turn into blocks of ice. And you, Pema, shake the snow from off the apple trees before they collapse.”
It was the middle of June, the height of the short summer high up in the Himalayas, along the border with Tibet. The weather had been glorious for several weeks”a mild sun and a cloudless peacock-blue sky. But then, all of a sudden, a deadly snowstorm had struck.
No one could remember it snowing so heavily at that time of the year ever before. The snow showed no sign of stopping even after a week, and in a short while the land was buried under a thick white blanket that stretched as far as one could see.
As everyone else in the house hurried about doing as Grandpa Jigme ordered them, little Tsewang, the youngest member of the family (he had just turned seven) sat by the window of the living room watching the snow pile up outside.
“The apple trees are ruined,” Tsewang heard his grandfather moan. “And the peas, which were just about to flower, have all been destroyed. How on earth am I going to feed this family this year?”
Tsewang listened carefully as his father Yeshe said to Grandpa Jigme, “Father, we won’t be able to pay the children’s school fees this year. We were relying on the apples and peas for that.”
“The roads are all blocked, and our stock of food’s fast running out. It won’t last for more than two days, and then what are we going to eat?” Tsewang heard his mother Dolma add.
“Why! We might starve!” cried Tsewang’s sister Pema.
Tsewang began to quake with fear. What if Pema was right and they were all going to starve to death?
Tsewang huddled deeper into the mountain of blankets, staring at the falling snow, whispering his prayers while warm tears rolled down his frozen face. “You won’t let us starve, I know,” he sobbed as he spoke with God. “You will never let us down, I know.”
Tsewang lifted his head and peered out of the window, expecting his prayers to have wrought an immediate and miraculous halt to the snow. But, the snow showed no sign whatsoever of abating
Just then, Tsewang’s attention was attracted by a battalion of sparrows squatting on the clothesline outside. The little brown birds seemed to be having the time of their life, merrily chattering away even as snowflakes fell on their heads. The fact that they probably hadn’t eaten for days”every bit of the earth being under several feet of snow, which covered up everything that they considered edible”did nothing to dampen their joy.
For a moment, Tsewang forgot his fear of impending starvation. He let out a loud laugh that seemed to echo through the entire house. It did seem very funny to him: how wholly indifferent to the storm the birds were”they didn’t seem to notice it and refused to let it spoil their fun”while human beings frantically rushed about doing whatever they could to save themselves and feared the worst.
“What are you laughing at, boy?” Yeshe asked Tsewang, “This is no time for fun. Get up and help me bring in the potatoes from the field before they rot and we starve.”
Tsewang jumped to his feet. But instead of heading to the potato field to help his father, he rushed into the kitchen and grabbed as many loaves of bread that he could find, stuffing them into the folds of his shawl.
“Where on earth are you taking the bread?” his mother Dolma called out. “That’s all we have left!”
But before Dolma could stop him, Tsewang flew out of the house and ran as fast as his little legs would carry him, till he came to the clothesline, where the birds were having their party. Dolma came running after him, but by the time she arrived Tsewang had already scattered the loaves on the ground and the birds were happily hopping around, munching on them.
Dolma shrieked at the top of her voice as she grabbed Tsewang by the ear and kicked and beat him. “What have you done? We’ve not a scrap of bread left. We’re bound to starve to death now, and all because of your foolishness. You’ve fed these miserable dumb animals and starved your own family!”
“Mumma! I promise you we won’t starve,” Tsewang stuttered. “God helps people who help others. I know He’ll help us now because I helped these famished birds. I know He will. He won’t ever let us starve. Believe me!”
And just then, as Dolma looked about, she discovered, to her great surprise, that the snow had stopped, the clouds were beginning to part, revealing a blue sky, and the sun was peeping out.
Yes, as Tsewang had assured her, God just wouldn’t let them starve.