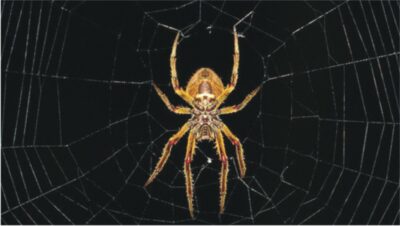 Today we will talk about the eight-legged creepy crawly we usually see in abandoned or ill-maintained houses. A seemingly small creature of Allah swt but funnily enough holds the power to strike fear in young and old alike. Most of us are scared of spiders even though we have never had any painful encounters with them.

The fear of spiders is known as Arachnophobia. Many films have been made based on the theme of Arachnophobia; many types of research have been conducted and many made-up stories also do rounds on these arachnids.

Today we will look at the spiders from a Muslim’s perspective. Why did Allah swt create these creatures? It surely wasn’t just to cause fear in human minds. Every spec of Allah’s creation is for a great purpose. The purpose is to benefit humans and to remind us of Allah’s supremacy over all things.

So let us start knowing more about this creature as Allah wants us to know.
• In Quran Allah swt has named a surah on the spider, ‘Al Ankabut’ surah 29. Ankabut means spider. We will find out what Allah swt says in this surah about spiders nearing the end of this article.
• Allah azwajjal has made many varieties of spiders, both big and small in size. In all these years, humans have discovered around 45,000 species of spiders. That’s a lot of different types of spiders!!! But scientists believe there might be many more species yet to be discovered. They will be discovered when Allah swt wants them to be discovered, till then they will remain unknown to us.
• The size of the smallest spider Allah swt created (known to humans) is one-fifth of a pin’s head. And the biggest spider that one has seen to date is almost the size of a foot.
• Allah swt created animals and gave them the ability to build their homes. We see how birds build their nests, and how bees build their hives, similarly, Allah ta’ala gave spiders the ability to build webs as their homes. But not all spiders have been given the mastery of making webs. Some spiders live in crevices and holes
• At first glance, all spider webs might look the same. But no! Allah swt has given them the ability to release around seven different types of silk. One might wonder what is the need for so many types of silk. The spiders use different types of silk for different purposes, such as moving across the web, as their shelter, protecting their eggs, or catching prey.
• A female spider has been given the ability by Allah swt to lay 3000 eggs at one time!! That’s a lot of eggs, I wonder what the size of each egg would be.
• There is another astounding use of the web. The spiders use it as a food source when there is no food around. Yes! Unbelievable, isn’t it? They eat their own silk to reuse its proteins when they need to produce new spider webs. Allah swt provides food in so many interesting manners.
• How many knees do we have? 2. How many might spiders have? Would you believe if I say that Allah swt has given them 48 knees? Each of the spider’s legs has 6 joints, hence the number of knees. (6X8=48)
• Another amazing fact about spiders is, that Allah swt has given them blue blood!! Now, don’t you set out on a spider-killing spree just to confirm this fact? Allah swt is the maker of every living thing and everything inside it, blue blood is nothing difficult for Allah ta’ala.
• Even though we are scared of spiders and think their bites are fatal, not many spiders are poisonous. Even the scary hairy tarantulas are mostly non-poisonous and have become a popular choice of pet for many.

Allah swt has created all creatures in a manner that benefits humans either directly or indirectly. The same is the case with spiders. At first look, they seem not useful to us but spiders act as natural pest controllers. They feed on mosquitoes, flies, cockroaches, and moths. A single spider can eat almost 2000 insects in a year. Now isn’t that helpful?!

Before we end, let us have a look at what Allah swt says about the spider in surah Al Ankabut.
“… but verily, the frailest (weakest) of houses is the spider’s house – if they knew” (Surah 29 ayah 41)

This is the only ayah in the whole Quran, where Allah mentions the spider.

So from next time, whenever we see a spider web, it should remind us of what Allah compares it to and what He is trying to warn us of.

If we look around from the eye of a Muslim, every part of the world looks fascinating and useful and every creation appears to be an ayah of Allah. There is so much to learn from every creation.