Simre had carefully prepared her speech for the event. She wanted to tell her class some nice things about her family and also about some good times that they had shared together. 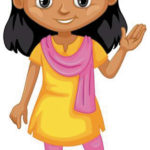